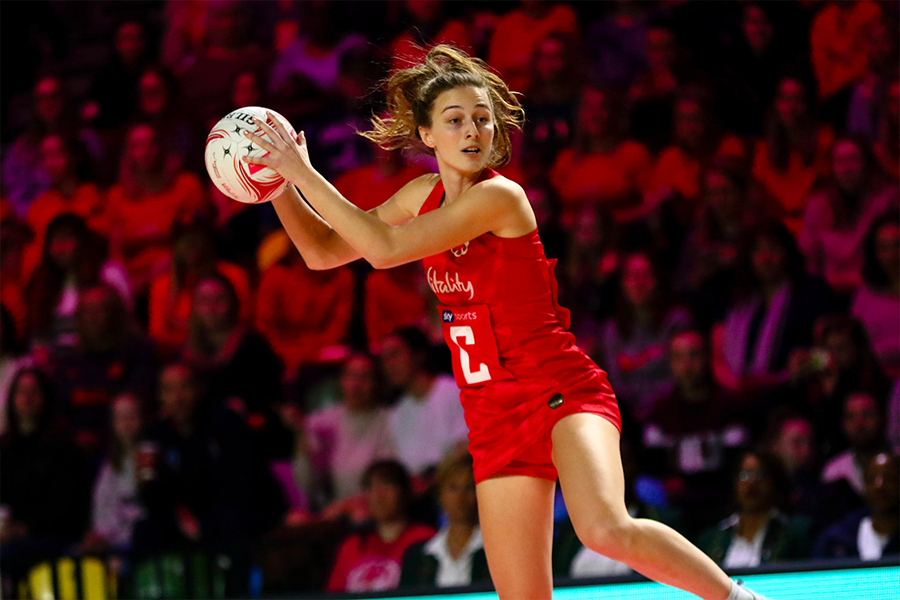 Ten years ago Amy Carter could hardly have imagined where her love of netball would lead.

Hooked by High Fives at primary school, the wide-eyed 10-year-old followed a bunch of mates to Macclesfield Ladies.

And the rest, as they say, is history.

A decade down the line Amy made her senior debut for England’s Roses and looked set for a standout season in the Vitality Netball Superleague.

COVID-19 might have halted the medical student’s meteoric rise for now but that hasn’t curbed the enthusiasm of the multi-talented 21-year-old.

“I’m due to get some bar balance equipment delivered from England Netball this week,” explained Amy.

“So I’ll be stepping up my fitness work and just hoping to get back out there as soon as possible.

“I’m in my third year at medical school but we’ve been passed for this year. I need to think about what I do next but for now the focus is on staying fit and well.”

Amy made her full debut in January in the closing stages of England’s Vitality Nations Cup clash against New Zealand.

And given her assured introduction to the senior international stage, it’s incredible to think she was still playing grassroots netball as recently as five years ago.

“After Macclesfield I moved to Tameside where I worked with the coaches Paul and Sarah Harper,” explained Amy.

“When I moved to Tameside I didn’t know anyone but that meant I had to take the initiative and interact.

“It gave me a lot of confidence. Once you know that you can go into a room full of people who you don’t know and still make an impression it means a lot.

“As I’ve got older and faced similar situations - such as going to university - it’s stood me in great stead.

“Netball is great for developing other skills aside from what you learn on the court. The life skills I learnt through playing grassroots netball still benefit me now.”

Amy was fortunate to gain the perfect introduction to the game as a pupil at Upton Primary in Macclesfield.

Her school was crowned county champions and an invitation to a summer camp followed.

“That summer camp was the gateway into joining a club and experiencing netball outside of school,” she added.

“At that stage you start to understand the key contribution of people who are donating their time and experience for free week in, week out.

“Netball is massive as a grassroots sport and for many girls it might be the only sport they play.

“The majority of girls play it at some point and now there are hugely successful initiatives like Back To Netball where England Netball encourages former players to fall in love with the sport all over again.”

As a rising star with Manchester Thunder, Amy is embedded in the North West’s close-knit netball community.

Juggling the demands of elite sport and medical school mean opportunities to engage with the grassroots game are few and far between.

But Amy will never lose sight of the sport’s importance at a community level and she added:

“There’s such a strong grassroots community around Manchester Thunder and it’s great to see.

“There are chances for local coaches to attend Thunder sessions and Ash Neal - who’s our wing attack - plays a key role reaching out to local players and clubs and working with grassroots netball.

“She’s great at engaging with our fans and ensuring Thunder sits right at the heart of the local community. And that’s where it should be.”