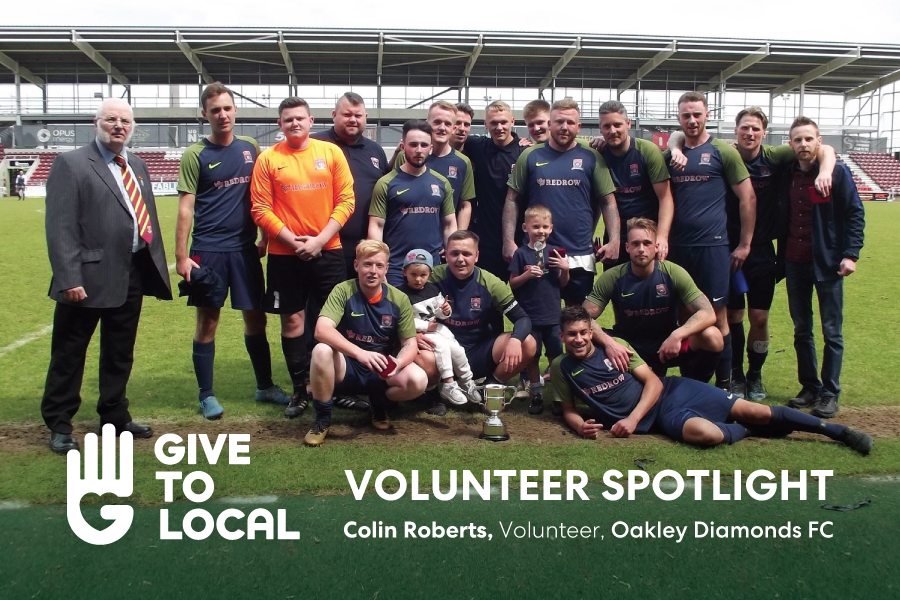 The reason we exist is due to a determination to recognise and support the unflinching commitment of the people who sustain the clubs we love.

And we wanted to find a way to say a public thank-you to one volunteer whose dedication to the cause is beyond doubt.

We asked the GiveToLocal community to share its stories about the unsung heroes at the heart of community sport.

And we found the perfect example of selfless volunteering at its brilliant best.

The 60-year-old was nominated by his son Kevin in recognition of years of service to Northampton’s Oakley Diamonds Football Club.

Taxi driver, father figure, kit transporter and former reserve team manager — Diamonds geezer Colin has done it all in the decade since Kevin revived a club close to their hearts.

“Oakley was my Pap’s (grandfather’s) team and they were formed in 1964,” explained Kevin.

“My uncle played for Oakley back in the day and my dad used to run the line for the team as a kid.

“It was always a real family affair and it’s still the same now.”

Kevin and Colin do everything together when it comes to organising Oakley’s teams.

And with plans in place to introduce a veterans’ XI in time for the 2021/22 season, the father-and-son duo are preparing for a busy summer following the toughest of years.

“Most of the players are local and live within a few minutes of the club,” added Kevin.

“That’s where my dad comes in. He devotes a huge amount of his spare time to driving round and picking players up before games and dropping them off again afterwards.

“I don’t drive so he gives me a lift and loads all of the gear into his minibus.

“It can take him 35 or 40 minutes to get round everyone but he’s the life and soul of the club and loves his role.

“He’s always there for all of us. He makes a point of checking if everyone’s ok and nothing’s too much trouble for him.

“He’s done just about everything for Oakley over the years. He was even reserve team manager for a while but when we lost my mum he decided to knock that on the head.

“Dad will always be Oakley through and through. All of the lads love him.”

But it’s been far from easy for Kevin and Colin during the last 14 months as community sport has been forced to adapt to the challenges posed by Covid-19.

And Kevin added: “The pandemic has been tough for us.

“I love spending time with my dad and everyone else in and around the football club. “The social side of it has been a big miss.

“Financially, we’ve obviously lost income but there have been other issues too.

“A few of the players have had to leave because they’ve lost their jobs and they’ve had to focus on other things.

“And there are some players who, understandably, have concerns about coming back given everything’s that happened.

“One of our longest serving players lost his mum to Covid and that puts everything into perspective.

“There have been so many ups and downs during the last year or so. It’s been a real rollercoaster. But we’re starting to get back to something like normality.”

GiveToLocal knows only too well that being able to count on volunteers like Colin is key to the survival of community sport clubs across the country.

And Kevin acknowledged: “Volunteers like my dad are the people who keep community sport going through the good times and the bad.

“I run the club but I don’t do anything without involving my dad.

“That’s why I told his story and it’s thanks to him that we’ve won the £500 voucher from GiveToLocal.

“The voucher will allow us to get a brand new kit for the veterans’ team, replace our nets and restock the training bags. It’s a huge boost just when we’re trying to get back up and running again.

“GiveToLocal has been such a huge shot in the arm for community sport. Everywhere I look they’re making a difference at grassroots level — whether it’s with basketball, netball, football or whatever.

“Unless you’re involved in community sport on a day-to-day basis it’s impossible to imagine just how difficult things have been during the last year. GiveToLocal’s service has never been needed more as far as I’m concerned.”