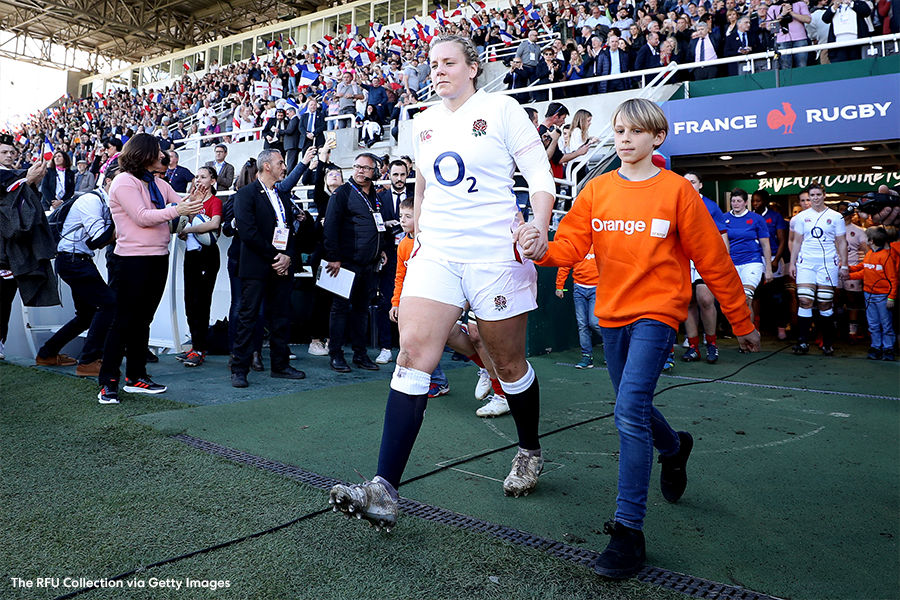 Vickii Cornborough makes no secret of her passion for grassroots sport and the role it continues to play in her stellar rise through Rugby Union’s ranks.

Even now - at the height of the coronavirus crisis - the Harlequins and England prop is a direct beneficiary of her sport’s keen community focus.

And Vickii believes that a sense of working together for the common good aligns perfectly with GiveToLocal’s mission to support local sport.

“In Rugby Union the grassroots community is always there - wherever you are on your rugby journey,” she said.

“Last weekend I took delivery of a bunch of new gym equipment from my local club Havant.

“It’s stuff that wasn’t being used at their place but I can set it up in my garden and get stuck into some new training.

“Then there’s my former club Portsmouth. They’ve used this time to support the NHS by redistributing energy drinks and other excess stock to key workers.

“Those are two shining examples of the Rugby Union community coming together and there are similarly positive things happening up and down the country.”

Vickii should have been celebrating a second successive Six Nations Grand Slam and a playoff campaign with Harlequins at the business end of English rugby’s domestic season.

However, like international athletes across the globe, the 30-year-old forward is training alone and adjusting to life under lockdown.

But Vickii is focusing on the positives - including the key contribution made by grassroots clubs to their local communities and GiveToLocal’s #InspiredToGive campaign.

“When you consider what’s happening right now, that contribution has never been more vital,” she added.

“In my experience, grassroots rugby clubs have always provided a ready-made support network which extends beyond their own players and members.

“It’s so important that those clubs are still there once the worst of the coronavirus crisis is over.”

Joining Portsmouth RFC’s mini rugby programme, she experienced the sport as a complete beginner and benefitted from its impact on and off the pitch.

“Portsmouth RFC are my hometown club and I recently moved back to the area,” added Vickii.

“I played mini rugby with the boys there up to the age of 12 and then moved from minis into the girls’ game.

“At that stage I wasn’t allowed to play with the boys but I was starting to play contact rugby. And I’d say it was only once we started playing contact rugby that I really started to love the game.

“My family is massively sporty and my mum and dad encouraged me to play all sorts of sport when I was younger.

“What I loved about that was the chance to make friends outside of school. I attended the local comprehensive and it was a chance to mix with children from all kinds of different backgrounds.

“That experience helped me later in life - I’d travel to different parts of the city and start to build up a rugby network outside of school.

“I’d be thrown into unfamiliar situations and I’d have to talk to lots of different people. These days I find that easy to do and I’m reaping the benefits of those days playing sport as a child and learning so much at a young age.”

Vickii is focusing on next summer’s Rugby World Cup as she strives to stay in the best shape possible during an enforced period of isolation.

But a spell of unexpected downtime has allowed the experienced international to reflect on the true value of grassroots sport and its myriad volunteers.

“One of my former coaches is now the chairman of Portsmouth RFC and that’s the kind of story you see across grassroots sport,” she explained.

“He started off as a volunteer coach working with the Under 7s and the Under 8s and has stayed heavily involved in the club ever since.

“He is just one example but you see the same up and down the country. These people keep giving back to their clubs and their community and their contribution is invaluable.”

With funding in sharp focus during the COVID-19 crisis, club treasurers across the UK are coming to terms with a stark financial future.

GiveToLocal aims to make it easier for community sports teams to raise additional funds via its incentivised giving platform.

And Vickii added: “The older I’m getting, the more aware I’m becoming of the way that rugby clubs are run.

“They are businesses and somebody has to run them properly.

“Normally it’s a group of volunteers who do that and the work they do to keep these clubs operating from one day to the next is so important.

“Right now, those volunteers and those clubs are playing an even more important role at the heart of their communities.

“And even though they are facing their own challenges, those clubs are still finding the time to support local people and local businesses.