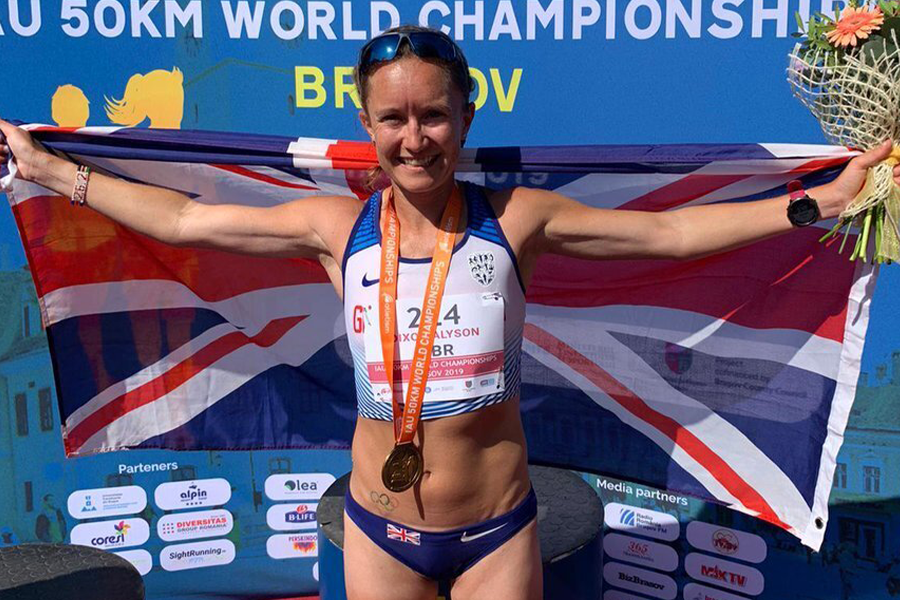 Aly Dixon has graced the world stage for more than a decade and this weekend the 42-year-old Wearsider will pace the elite women’s field at the London Marathon. But it was grassroots sport that took the Great Britain international from wide-eyed wannabe to elite runner and Olympic star.

GiveToLocal: Was sport always part of your childhood?

Aly Dixon: Even as a five or six-year-old I was always wanting to play something and I must have driven my parents mad. I never remember thinking ‘I want to be a runner’ as a kid though. I wanted to be a gymnast or a dancer - in fact pretty much anything apart from a runner! But I was a super active child. I did a bit of everything at school and I was on every team even if I had no idea what I was doing. The PE staff would stick my name down on the list for just about everything because they knew I’d turn up raring to go. I loved netball but it quickly became clear that, as a five-footer, my future lay elsewhere! I had loads of hobbies and interests as a little kid but running just wasn’t one of them.

GTL: So when did running become your thing?

AD: When I went to senior school my best friend told me she was a member at Sunderland Harriers and I fancied going along. When I told my dad he was over the moon. He’s always been a big runner but never wanted to push me into it. My parents have always been incredibly supportive without ever putting me under any pressure. Because of my dad’s background I was brought up around the running community - maybe that’s why I didn’t take to it straight away! Every Sunday morning our front room was full of sweaty men in vests and tight shorts who’d just finished a 20-mile run. Even though they weren’t the best advert for the sport, athletics was just a way of life in our house. And I guess that’s why I slotted into it pretty seamlessly when I did join Sunderland Harriers.

GTL: Were your early days at the club more to do with socialising or serious running?

AD: Probably the former. I didn’t really consider elite athletics until I was at university and I competed in the BUCS championships. When I first joined the Harriers that was my group of friends. As we got older we’d go out together on a Friday or a Saturday and I’d mix with people from different schools and different backgrounds. Behind the scenes I was working hard and progressing up the ladder as far as athletics was concerned. But I enjoyed the social life around the Harriers and the fact that it was a friendly and thriving grassroots community. I’m a naturally shy person. But being in that environment - away from the school bubble - allowed me to grow in confidence and develop my own identity. I used to love the trips to meetings in other parts of the country and I still keep in touch with some of my friends from back then. Being part of the athletics club kept us out of trouble at a time when, as teenage girls, we were very impressionable. As sixth formers we’d still sneak off for a drink but that was about as bad as it got. Our running kept us on the straight and narrow. A few of my friends from back then eventually drifted away from running but as they’ve got older they’ve come back to it again and that’s great to see. It’s still very much a social sport. And like most grassroots sports it provided me with a life education.

GTL: Was there a coach or volunteer who made a significant impression on you during your days as a grassroots runner?

AD: Ken Jefferson, who is sadly no longer with us, was a huge influence on me and a lot of other aspiring runners at Sunderland Harriers. His is a typical story in grassroots sport where a parent starts to get involved through their son or daughter and then ends up becoming a stalwart of the sport for 35 years. His son left after a few years but Ken was already a key figure at the Harriers by then and he made a big impression on me. He would accept anyone into the group and often did! The police used to bring some pretty bad lads down to training in an effort to get them off the streets and into sport. Ken would always take them in and went on to become quite the father figure for a few of them. He just bled grassroots sport. Mo Farah used to come up to Sunderland to train every so often as he had a friend who lived up here at the time. This was when he was around 15 and nobody knew what he’d go on to achieve. Even back then Mo was football-mad and he’d turn up to training kicking his ball across the track. It would drive Ken crazy! I remember him on many occasions giving Mo a real dressing down and once he said ‘I don’t care how good you are. You either train properly or you take your ball off the track and go home’. I still laugh about that now!

GTL: Grassroots athletics has taken a hit as a result of the global pandemic. What has the effect been on the sport in the community?

AD: Of course there have been fewer opportunities to train, fewer opportunities to get together socially and fewer opportunities to raise funds. That’s where GiveToLocal has made such a difference. I read about the organisation and the work it was planning to do earlier this year and it made me sit up and take notice. I even considered applying for a job there! The service has come onto the scene at just the right time. But it would be wrong to suggest that it’s all doom and gloom for athletics at a local level. I see many kids clocking personal best times and thriving without the pressure of regular competition and constant scrutiny. I haven’t had the chance to talk to the juniors so I’m not sure how they’re faring mentally. But from the outside looking in I think a summer ‘off’ has done many of them the world of good. They’ve gone back to enjoying athletics as something fun and rewarding.  Hopefully they’ll start next summer’s season refreshed and rejuvenated.

GTL: And how have you adjusted to life under the cloud of coronavirus?

AD: It’s been hard for senior runners and people of my age. I have seen a few events come and go this year where, at the age of 42, I’ve thought ‘there goes my last chance to do this or that’. I’ve always wanted to run the Chicago Marathon and that was the plan this year. It’s still on my to-do list for 2021 - if it happens - but I’ll be another year older and physically I feel nearer to 97 than 27! Who knows? I knew that I wouldn’t be in good enough shape to compete in Tokyo this summer. I could have achieved the qualifying time but I wouldn’t have been anywhere near the team this time. So at least I don’t feel like I’ve missed out there like a lot of athletes. For many senior internationals - like the kids - a summer off will have been of huge benefit. But what it means is that 2021 will be a crazy year and 2022 even worse! There will be three major competitions back to back in the space of a few weeks in 2022 and you have to worry about some kind of burnout in a couple of years’ time. But that’s a problem for another day. Right now, we just want our sport back again at grassroots and elite level.

GTL: At least you’ve got this weekend’s London Marathon to look forward to…

AD: Yes! I was really excited to get the call from the organisers asking me if I’d be a pacemaker for the elite women’s field. At the moment the plan is to take them through to the halfway stage in around 1:14:30 which would mean they’d be on course to hit the Olympic qualifying time (2:29:30). Of course, it’s a very different London Marathon this year as it’s multiple laps around St James’s Park rather than pounding the streets of the capital. And of course there are no fun runners which is a terrible shame but totally understandable.

GTL: A ban on fun running has left a huge void in the coffers of community clubs and charities across the country - have you noticed the impact?

AD: Definitely. I’m very proud to be an ambassador for St Benedicts Hospice in Sunderland and events like the London Marathon and the Great North Run are vital annual fundraisers for organisations like that. St Benedicts looked after my cousin, Andrew, my grandad Tommy and my uncle Bill before they passed away. The hospice do a fantastic job and they asked me to be an ambassador which I was delighted to accept. But I knew that simply running the Great North Run on their behalf wouldn’t cut the mustard. So last summer I checked the world record half marathon time for a runner dressed as a superhero and let everyone know that’s what I was doing. Of course, I never imagined I’d be doing a half marathon dressed as Wonder Woman just a few days after completing my first ultra-marathon. And it was just my luck that the record was broken by another Wonder Woman earlier in the year - making it even more of a challenge. You couldn’t make it up! But I broke the record and raised more than £4,000. Something like that just hasn’t been possible this year and it’s been a tough six months for fundraisers everywhere.

For details on how to support St Benedicts Hospice visit www.stbenedicts.co.uk