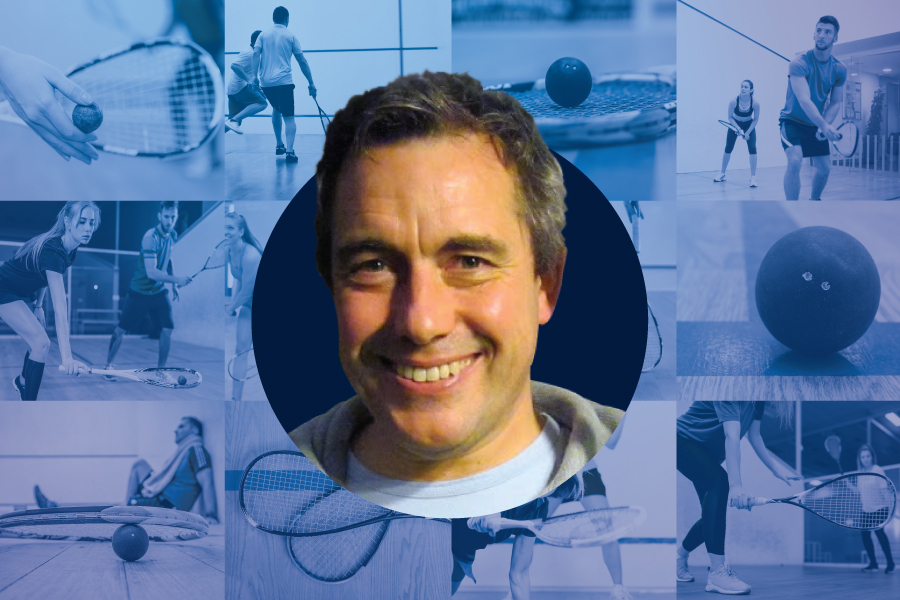 GiveToLocal: When can you remember picking up a squash racket for the first time?

Bryan Beeson: It was probably at comprehensive school. We used to live near to the school and we’d always be jumping over the fence to play on the tennis courts. So I was used to having a racket in my hand from a young age. There was also a badminton club at school. My brother joined and so I started playing a lot of badminton too. At the time I was probably a better footballer and cricketer. But I was at high school when my older brother joined a squash club for the first time — I think there was a two-week free membership offer to get people interested and involved so I went along to see what it was all about. All that tennis and badminton meant that both me and my brother were quite good at squash. We played a lot of it but back then I was still playing loads of other sports. I played football in the winter, cricket in the summer and anything else that I could manage in between! As I got older, I suppose I started to play more badminton and squash during the winter and I was still playing tennis during the summer.

GiveToLocal: Did there come a time when you had to focus on your squash?

BB: It wasn’t until the end of my school days that I had to make the decision between squash and football. At the time I’d met a load of nice people playing squash and I was part of a friendly and welcoming community club. That made all of the difference. I’d already learnt lots of invaluable lessons through squash and a lot of my friends were older than me. I liked that and I wanted to learn more. It was also the only way I could improve my game. These days juniors get so much support and coaching but back then I would go to the odd county training session and the rest of the time it would be down to me to raise my game. When I was 16 or 17 I realised I needed to take my squash more seriously and I was 17 when I won my first senior county championship. I won it for 16 years in a row!

GiveToLocal: When did you turn professional?

BB: I was very late turning professional and I was 24 before I took the plunge. I’d left school at 16 and done an apprenticeship in engineering so I’d been focusing on my career. But I went to compete in the British Championships in Sheffield and came from nowhere — as an unseeded player — to make the final. I lost the final to a British international who was ranked fourth in the world at the time. It turned a few heads and the company sponsoring the event was Inter City trains. Their marketing director just happened to be from Newcastle and he said they’d like to sponsor me. Within three or four months I’d turned fully professional and I was off to Hong Kong to compete in the big tournaments.

GiveToLocal: How did you adjust to the transition from amateur to professional?

BB: It was tough. I’d gone from a lad who played with his mates in his spare time to training and playing every day and competing against the world’s very best. It was a huge step up and a steep learning curve but I loved it. Within two years I won the British Championships and I was playing for England. I won 53 caps in the end and we finished third twice in the team world championships. I managed to make it into the world’s top 10 and I was taking on all of the world’s top players. I beat most of them at one time or another but the challenge at that level is to string a sequence of wins together at the same tournament. Beating one world class player isn’t enough if you want to win the big prizes. You have to win two or three matches in a row to make serious progress and for a late developer like me that was always tough. But I worked hard and I was professional for eight years. It was a wonderful time of my life.

GiveToLocal: And has squash continued to play a big part in your life?

BB: I’ve never stopped playing and I also enjoy coaching. I hadn’t played at a high level for years but then, two years ago, I went to visit one of my two sons in New Zealand. For some reason I Googled ‘squash masters tournaments’ and the New Zealand Masters (for over 50s) just happened to be taking place while I was due to be over there! The event was in wine country too and I’d wanted to visit the vineyards over there. I ended up winning the tournament and the organisers suggested I enter the World Championships which were due to take place in Johannesburg. My brother joined me over there and I finished fourth! Last summer I turned 60 and I was due to step up an age category and play in the World Championships in Poland. Of course, it didn’t happen in the end but I’ve been well and truly bitten by the international squash bug again. I need to start training again so that I’m ready for the next worlds.

GiveToLocal: Why would you encourage people to check out their community squash club once the latest lockdown restrictions are eased?

BB: It’s such a good sport for all ages. Your game is done and dusted in 40 minutes so it’s not a huge drain on your free time. And the squash scene is a very social scene. It always has been. I never tire of telling people what a fantastic sport it is. I’ve always loved working with squash players of all ages and abilities. From a coach’s perspective I suppose seeing an average player become a good player is just as rewarding as seeing a good player become one of the best. That’s how I’ve always felt.

GiveToLocal: Do you feel GiveToLocal’s support of squash can help clubs to emerge from the latest lockdown with confidence?

BB: It’s fantastic to know that GiveToLocal will be supporting squash. It’s a sport that’s been hit really hard by the pandemic and a sport that needs all the support it can get once we’re allowed to get back to playing properly. Due to the confined nature of the courts and the close contact between players we haven’t been allowed to play a conventional game of squash since March. Local leagues have closed down and social players are losing touch with the game they love. My concern is that older players who’ve got out of the habit of playing will be lost to the game now. And younger players might have turned their attention elsewhere. With GiveToLocal’s help we can ensure that 2021 is the year that squash bounces back.