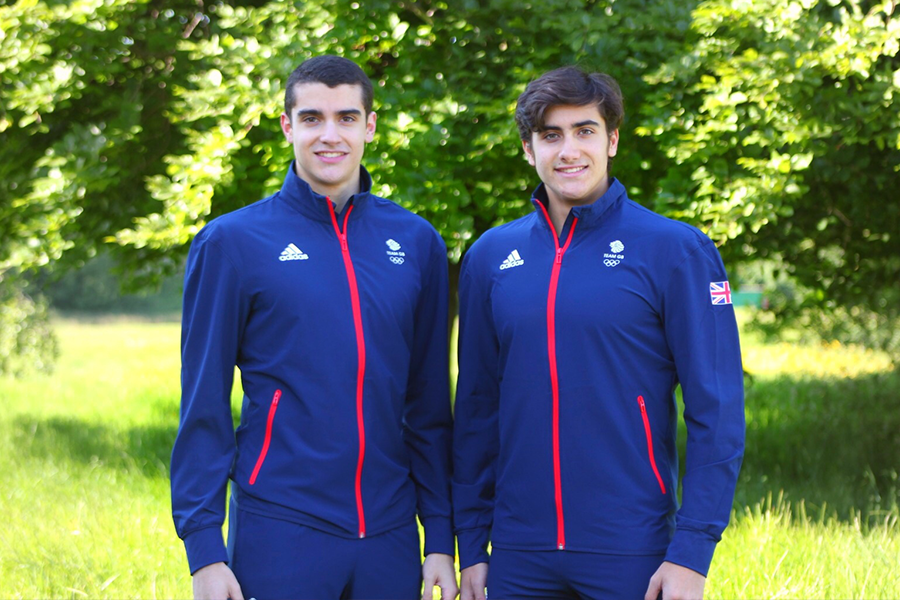 They’re the rising stars of British beach volleyball and making waves on the international scene. GiveToLocal caught up with Javier and Joaquin Bello as they set their sights on more World Tour medals and Commonwealth Games glory.

Javier Bello: I don’t even remember exactly when because it was probably earlier that I have memories of! I’ve seen pictures and videos of us barely old enough to walk and already trying to play volleyball with balloons and soft balls.

Joaquin Bello: I would say at the age of four or five we already understood the basic rules of the game and had our own ‘house championship’ using an elastic band as a net. I got my first proper volleyball shoes when I was around eight years old and my knee pads were actually elbow pads that I used on my knees - we couldn’t find ones that would stay in place on my small legs.

GTL: As kids what sports did you play and which did you enjoy most?

JB/JB: Our first sport was roller hockey because it was really popular in our school and we started skating during lunch breaks at the age of three. We then did Judo as an after-school club and we’ve also played tennis, basketball and, of course, football until we were 12. We also went skiing a few times every year and became pretty good at it. But volleyball has been the constant sport growing up because of our dad being a professional player and then coach. And our cousin became Under 21 world champion in 2004. We remember always having volleyballs around the house and in the car and we’d pick them up and start peppering each other and our dad anytime and anywhere.

GTL: Were you competitive brothers growing up?

JB/JB: Yes! We’ve always been very competitive, starting with each other and our younger brother. We always wanted to win and we were very disappointed when we didn’t. But that only sparked our desire to keep improving and go back and win.

GTL: When did you start playing volleyball and where?

Joaquin: We were born in Madrid (Spain) and when we were six we started playing mini league with our local club. We trained twice a week and had matches on the weekends. It was super fun and we’re still in touch with some players from back then. We moved to London in 2010 and the first thing our parents did was to look for a volleyball club locally so we could make new friends and keep playing.

GTL: Was there a particular coach or a volunteer who made a strong impression on you in your formative years?

Javier: Of course our father and coach has always been the strongest influence growing up and in terms of us developing in our sport. An ex-player himself, he has a very ‘academic’ approach to volleyball. He’s almost obsessed with technical perfection and boasts a huge amount of experience at all levels - from beginners to pros.

Joaquin: We’ve also been very fortunate to have been exposed to other coaches internationally like Jose Loiola in the US, Danny Wood, Fran Marco and Marcao in Spain, to name but a few. All of them have brought something different to our training and our game.

GTL: How important is the role of unpaid coaches and volunteers in grassroots sport?

Joaquin: I think it’s critical. The volunteers running the local clubs are the real heroes behind every sporting success story. But, more importantly, I’d say they play a key role in building fundamental values that relate to sport but that also stick with you later in your career and your life.

GTL: At what point did you realise you could take your volleyball to the next level?

Javier: Ever since I started playing, I’ve always dreamt of becoming a professional player and this ambition to be the best has always been there. But the realisation probably came when we won our first international gold medal at the age of 15, followed by the gold at the Youth Commonwealth Games when we were 16.

GTL: Was it always the plan to play alongside each other as a pair?

Javier: I think it came naturally and it’s become a huge advantage for us. It’s not just that we obviously know each other so well but also, in spite of having very different personalities, we complement each other perfectly. We have the same level of motivation, ambition and understanding of the sport.

Joaquin: Also, from a practical point of view, we live together and train together. That makes it a lot easier for us to plan our training and competitions calendar.

GTL: What are the pros and cons of playing together?

J&J: Pros - we complement each other perfectly. We share the same passion and ambition and logistically we can adjust to each other’s needs. Cons - it can become too intense at times and we used to argue - even on court - all the time. Financially, our parents have to support a whole team and not just one player.

GTL: Is beach volleyball in the UK improving across the board?

J&J: Yes, it’s improving massively - not only because the participation keeps growing every year but also because the level is increasing. We now have a National Tour (called UK Beach Tour), which is helping grow the sport and has many tournaments across the country and for all levels of competition.

GTL: What are the challenges facing the sport right now?

J&J: The sport itself is extremely healthy internationally with more players, more media exposure and more opportunities than ever. In the UK, although it’s growing, the lack of venues, especially winter proof facilities like every other country in Europe has, represents a huge barrier. We’re only able to train for six months a year. And of course, like every sport apart from football, there’s a difficulty accessing the funding we need to become better.

GTL: How do you reflect on last month’s Under 22 European Championships?

Joaquin: Unfortunately, I had a severe sprain on my right foot two days before flying out to Turkey and we had to make the tough decision to call up the reserve player with whom Javier had never played before. It’s never a good time to suffer an injury but this one was possibly the worst. We’d prepared for months and been through lockdown looking forward to this competition.

Javier: Having finished ninth last year, our goal was to medal this year. We know it’s within reach but it will have to wait until 2021. Still, despite having lost in the toughest pool we could have faced, Freddie [Bialokoz] and I had some good performances and showed great determination.