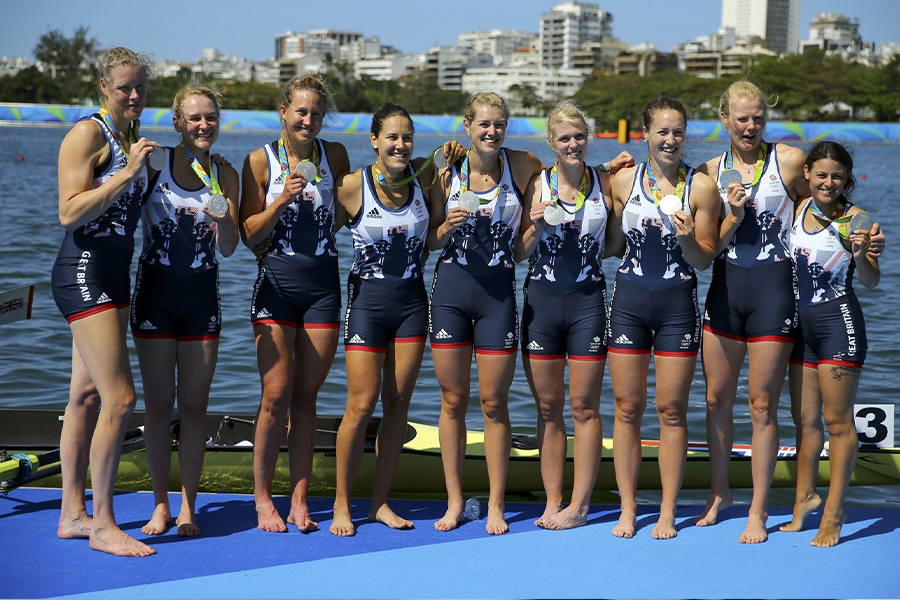 Rowing is one of six new sports GiveToLocal is supporting this year as part of our ‘21 for 2021’ initiative. We caught up with three-time Olympian and Rio 2016 silver medallist Jess Eddie to find out more about her rowing journey and her perception of community sport.

GiveToLocal: How important was community sport to you as a youngster?

Jess Eddie: I began rowing at my local club, Durham Amateur Rowing Club and, on reflection, I was so lucky to have DARC as my local club. There’s no doubt that the volunteer run community club played an integral role in my development from beginner to Olympic rower. I was accepted straight off and welcomed into a group of other youngsters all eager to learn a new skill and form a great group of friends.

GiveToLocal: What are the benefits of community sport to the wider population in terms of physical and mental health and general wellbeing?

JE: Rowing really is an excellent all-round sport. You can’t do it alone and it requires a team around you. Of course, there are the people who row in a boat with you but the team is wider than that. It’s the mums and dads driving you around, the coaches giving up their time to instil some passion and fitness into their athletes and the members helping out behind the bar or at cake sales raising money for boats. It makes you disciplined but you also learn to trust those around you as you have to rely on your team and know that they’ll be racing and training just as hard as you. Our sport is a fine balance between rhythm, clear headed thinking and all-out power which doesn't sound like a great combination! But if you can master that mix it’s the perfect headspace for relaxation and taking a moment away from the world.

GiveToLocal: Before you started rowing what sports did you enjoy and why?

JE: I did every sport I could! My twin sister and I played mini rugby at Durham City Rugby Club. My dad was a keen rugby player and, after captaining Durham City for many years, he took us down to play and we loved it. I also did every sport under the sun for my school from netball to cross country. I think learning different skills is very important and being able to listen to instruction and play in a team whatever the sport is a great thing for young, budding sport stars.

GiveToLocal: How did you get into rowing and what attracted you to the sport?

JE: The rowing club is literally next door to the rugby club, so it was a natural progression. When we were younger there wasn't a women's team at the rugby club and so when we reached 11 we had to move away from rugby and we threw ourselves into rowing. Also, you can't really miss it if you live in Durham. The river flows straight through the heart of our city.

GiveToLocal: Is there a volunteer or a coach who made a big impression on you as you embarked on your athlete journey?

JE: I had such a remarkable team of volunteer coaches from Durham ARC. To start with we had Jim Dulling and Peter Burdess who first took us on and showed us the ropes. Then, in my later years, as my sister and I progressed to national titles and international representation, our coach Gordon Beattie took over and guided us. I was also lucky enough to get the opportunity to train with Durham University, where Wade Hall-Craggs allowed me to join his programme.

GiveToLocal: How difficult has it been for rowing clubs since last March?

JE: Covid-19 has hit rowing and all sports very hard. I really feel for the young athletes the most — they’re missing out on racing and having fun with their friends. I’m positive, however, that there have been pockets of rowing and lots of indoor rowing too! We’ll persevere, have even more fun and maybe even appreciate what we’ve got more when we come through this.

GiveToLocal: Fundraising is key to keeping community sport alive — how important is it to support those volunteers who dedicate their spare time to raising money for clubs across the UK?

JE: Sports clubs need our support at this moment. I would urge people to keep their membership if at all possible or support the small volunteer run clubs with their time when that’s possible again. I’ve loved seeing people fundraise through sport during this year. It’s shown that we, as a nation, turn to sport in times of need.

GiveToLocal: Why would you encourage young people to give rowing a go?

JE: Just get out on the water and you’ll feel the benefit! There are so many ways in which people can get rowing — it isn't just for the big schools or the private clubs. Check out British Rowing's website and find your local club. Learn to row courses are run everywhere and they’re a great introduction to our sport. Don't be daunted by it. We just do the same thing over and over again!

GiveToLocal: What are your plans for 2021?

JE: I’ve been involved with a really fun initiative called zoomergos.com recently. It was started to give people an outlet during lockdown and it’s an opportunity to do some indoor rowing with international rowers. We run sessions every day of the week and they’re completely free. You just have to sign up via the website. It has given everyone a real sense of the rowing community. I’ve welcomed 60-plus people into my kitchen twice a week and loved it. I do hope to get out on the water a bit more and fingers crossed we’ll get some racing by the summer. It’s our light at the end of the tunnel.