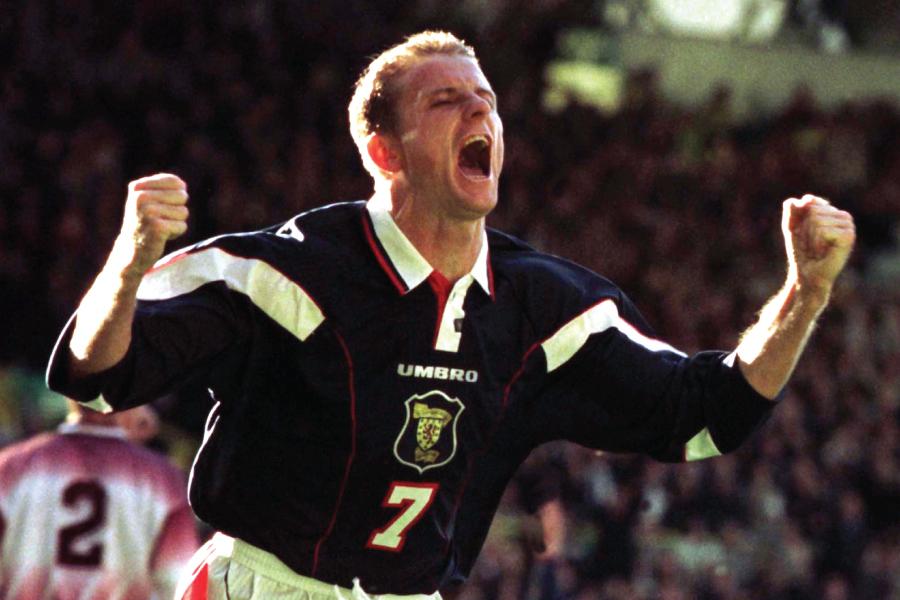 GiveToLocal: What do you remember about playing football as a child?

Kevin Gallacher: The opportunities to play grassroots sport back then were few and far between. When I was a kid we played street football - boys and girls of all ages and we just made up the rules as we went along. We’d find spare bits of grass if we could and the games would be anything from 1v1 to 15-a-side! I loved it but I didn’t really take football seriously until I was 11. That was my first experience of grassroots football - playing Under 11 football in Glasgow. I joined Duntocher Boys Club and stayed with them for a couple of years.

GTL: Did Duntocher offer you a route into the professional ranks?

KG: They were a Clydebank club and scouts used to come from all over to watch our games. We had a good team with plenty of talent and at 13 the scouts were allowed to talk to the kids and their parents. If you were good enough you’d get invited to join an academy and play youth team football. At 16 you hoped you’d be offered an apprenticeship and that was the pathway back then. It was a fantastic time for me.

GTL: Was it tough to make your presence felt?

KG: I saw many top players fail to make it. My mates back then went on to become policemen and do all sorts of jobs. Different people took a different approach and people I expected to become professional footballers ended up elsewhere. But a few of the lads who didn’t make it at the top level ended up back in the grassroots game.

GTL: Is there a coach from your grassroots days who stands out as a major influence?

KG: At Duntocher we were very lucky to benefit from the coaching of Gerry O’Brien. He played for Hibs and Clydebank in the 70s and spent six years with Southampton. I’d watched him as a kid and he was a legend where I lived. He helped out the boys club and we’d see him once a week for training. He’d also come to the games. His nephew joined Duntocher and Gerry became more involved - passing on his experience as a player. He spoke to us about what we needed to do to make it at the top level and I took it all on board. What he said really resonated with one or two of us back then.

GTL: How important was the football community to you growing up?

KG: Football was a big part of my life as a kid. I grew up in a pub in Clydebank and when I first started playing properly it was a 30-minute drive from the pub to where I played. Even then it was a big commitment. I was only Under 10 but I was picked up by an Under 13/Under 14 team and I think at that point my dad realised I was a decent little player. I played there for a couple of years before we found Duntocher and, by comparison, it was right on our doorstep. I ended up playing with some of the same lads from school. We played school football, Boys Guild football and club football together. We became a good team and good friends. We were playing against Celtic Boys Club and Rangers Boys Club and more than holding our own. It gave us an idea of how good we could be and how far we could go and it was great to be a part of Duntocher at the time.

GTL: Are there more opportunities at grassroots level now than there were when you started playing football?

KG: I think the opportunities are there in grassroots football today but I don’t see as many kids playing the game. It’s very different in and around Blackburn now compared to the way it was when I was growing up in Clydebank. There’s a lot more movement between grassroots clubs now and the bigger teams seem to have the pick of the best kids and coaches - often to the detriment of the smaller teams. It can become quite political and I do understand the reasons behind ambitious kids wanting to move on. But those smaller clubs need support and we mustn’t forget their value to the grassroots game.

GTL: Do you think GiveToLocal has a role to play in consolidation the community sport scene?

KG: There’s no doubt GiveToLocal can be of value to community clubs who rely on volunteers to keep teams ticking over. It’s a familiar story in grassroots sport: you appeal for help and suddenly people can’t make it or can’t help. Time and time again it comes down to the same core of committed volunteers and they often face a very difficult job. If GiveToLocal can make it easier for them to raise funds and, at the same time, connect them with businesses in the local community, it’s got to help. People still look at football at the highest level and see that it’s awash with money but that’s not the case at grassroots level. These are tough times for community sport.

GTL: How has the pandemic affected you?

KG: All of my businesses - including the G8 Soccer School - are football related and so when the game shut down at every level it was disastrous for me. It’s been a very difficult period. When one-on-one sessions were able to resume I was fortunate that Whalley Junior School - near to where I live - found me some space to resume coaching and thanks to them I was able to get up and running again, albeit to a limited extent. Whalley Juniors FC helped me throughout August at a time when my G8 Soccer camps would normally be taking place. At that point we could have one coach working with four players and it was a little better.

KG: We’re just waiting for more facilities to reopen but even those that are open have limited time and availability. It’s been much tougher than I expected. After the first raft of restrictions were lifted I honestly thought things would get easier but it’s still incredibly difficult for everyone operating at grassroots level. I thought we’d be back up and running fully long before now but that’s not the case.

GTL: How hard has it been for those kids missing out on their weekly grassroots football sessions?

KG: It’s been really tough for the kids who live and breathe their football. It’s been an unbelievably difficult time for them. For a while they weren’t doing anything. Kids were cooped up in the house and not even playing in the garden. They were plugging into their PlayStations and X Boxes and that was as close as they were getting to sport. Kids who were having growth spurts were getting bigger but not in terms of height. And when they came back to the one-on-one sessions they were finding it really tough. They were carrying a bit of weight - often without realising it - and finding the return to football very hard. Loads of them had been doing the Joe Wicks workouts and thought that would keep them fit but they realised they hadn’t been doing enough. I saw a lot of kids come back to football overweight and unfit and that’s when the impact of the pandemic really hit home. It’s our job to get them back to where they were and where they should be.

GTL: Do you see the situation improving anytime soon?

KG: There is light at the end of the tunnel as far as grassroots football is concerned but for soccer schools and academies it’s a case of finding the facilities at a competitive price. The fees for pitch hire can be prohibitive. I was in Spain with a school last October and the grassroots sport system over there is magnificent. They have ample 3G pitches and the hire fees are affordable. We have to look at putting the same system in place over here. If facilities are charging £50 and hour then people involved in kids’ grassroots football can’t afford to pay that. It’s a real challenge. And as someone who faces that challenge on a daily basis I can see why so many former pros and international footballers decide against returning to the grassroots game. There’s money going out all of the time and very little coming back in.

GTL: Two of your former clubs lock horns in the EFL Cup this week as Newcastle United host Blackburn Rovers…what’s your assessment of Rovers this season?

KG: I said last season that Blackburn needed six players to push towards the playoffs. They brought in a couple on loan last season - including Stewart Downing - and came very close to the top six only for their form to disintegrate.  They need to add to the squad and if they don’t then the best they can hope for is mid-table again - I can’t see anything better than that. For Rovers, right now, consolidation in the Championship is key but if they can make some quality additions then they might just be able to sneak into the playoff positions. It would be great to think that could happen. But first things first - focusing on Championship consolidation is a must. It just becomes more and more difficult to get out of that league every year. Every team that comes down retains the bulk of its players and they start as favourites for promotion straight away.

GTL: Adam Armstrong is going great guns for Rovers - how pivotal a player has he become for Tony Mowbray?

KG: Armstrong is on a great run at the moment but Bradley Dack is a big miss and they need him back sooner, rather than later. Armstrong came into the team and answered the questions being asked of him and at the moment he’s key to Rovers’ success. Danny Graham has gone back to Sunderland and he’s been a kingpin in the team up front, grabbing a goal every three games. Blackburn have two forwards in Ben Brereton and Sam Gallagher who need to hit form and score some goals and if that happens then the team can cause problems up front. But it’s defensively where Rovers have real problems. The club didn’t cover themselves defensively last season and haven’t done so again. It seems as if every time Blackburn go for a defender that could improve the squad some other club pips them for the signing. Tony Mowbray has has a fairly young squad with real potential but he needs some experience at the back.

GTL: And how far can Newcastle go this season?

KG: I didn’t see Newcastle’s game against West Ham but I saw the score and results are what matter most. It was a great result. People forget that it’s only a couple of years ago that the club was in the Championship and re-stablishing themselves in the top flight is no easy task. It would be difficult anyway but with everything that’s going on off the pitch it must be easy for players to take their eye off the ball. All the uncertainty around the club’s future diverts from the playing side and I just hope that Steve Bruce can persuade the players to get their heads down and do their job. If Newcastle can catch a couple of the bigger teams on a bad day then they could finish top half but staying out of trouble has to be their primary focus again.

KG: He scored a lot of goals for Bournemouth and they showed how to play to his strengths. He’s a very shrewd buy. He gets in the right positions and can create goals for the players around him. He reminds me very much of Alan Shearer in that respect. He’s very similar in the way he plays and the positions he works. Newcastle have lacked a go-to goalscorer in the last few seasons and they might just have found one - finally.