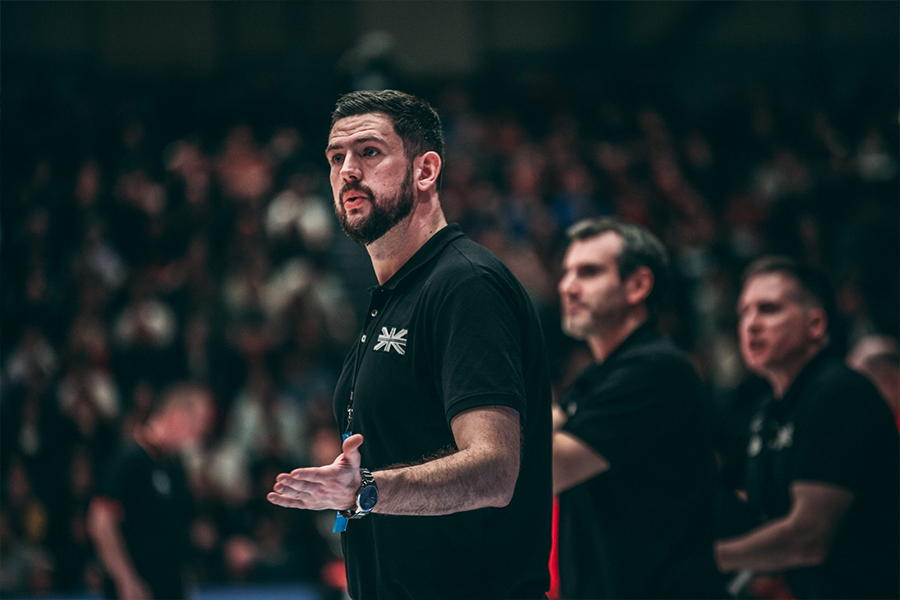 One of Europe’s most talked about playcallers talked exclusively to GiveToLocal ahead of a big weekend of international basketball action.

GiveToLocal: How has the ongoing global pandemic affected your preparations ahead of this weekend’s Eurobasket qualifiers against France and Montengero?

Marc Steutel: It’s been a challenge with Covid-19 and clubs and players still coming to terms with its impact on and off the court. There are so many individual situations to consider at the best of times. Add in a global pandemic and it’s been more of a challenge than usual!

GiveToLocal: Can you give us an insight into the current situation?

MS: We brought 14 players into our bubble in Pau. We arrived in France on Monday and everyone had to submit two negative tests to FIBA before they could fly out of the UK. We have limited time with the players but we do tend to look at things through a very British lens. Every nation is going through the same thing — whether it’s dealing with Covid-specific challenges or securing the release of key players during the international windows. Look at France. They’ll be disappointed that their NBA players aren’t available and so as coaches we all have different hurdles to overcome.

GiveToLocal: Prior to heading to France was it very much business as usual?

MS: We did what we always do. We prepared the best we possibly can. We track our players on a weekly basis, watch those we can and keep a constant eye on who’s available. We know who’s healthy and we try to ensure that the core of our group is available during each window. We’re firm believers in maintaining consistency within the group but we’re also aware that individual players’ circumstances change and we need to be on top of that. Akwasi Yeboah is a great example. He’s had a hugely successful college career in the US but signed for Saint Quentin in France this summer and so he’s suddenly available for selection.

GiveToLocal: As acting head coach are you blessed with plenty of options during this qualification campaign?

MS: We’re very fortunate that we have a core of players who we can rely upon. But at the moment we’re looking at a deep pool of players — even beyond the initial 24 who we named for this month’s qualifiers. We track that pool far and wide and it’s exciting in that respect to know that there’s so much talent out there.

GiveToLocal: Are the 14 in France the best British players at your disposal right now?

MS: When it comes down to selecting a squad for the Eurobasket qualifiers it’s not as simple as player A being better than player B. It starts with who’s going to be available and from there we look at the specific needs of the group and the strengths of the opposition. There are so many different layers to consider before we can actually get our squad together at relatively short notice. How we want to play — with the resources at our disposal — is what we focus on. And then we focus on how we think the opposition will play. But the players that we’ve selected have one thing in common: immense pride in representing their national team.

GiveToLocal: How proud are you to be stepping up again in Nate Reinking’s absence?

MS: Being part of the Great Britain set-up is something I’ll never get used to and it’s an immense privilege to be in this position. But I wouldn’t be here without the players and I make a point of thanking each and every one of them each time they pull on a GB vest. I thank them for their ongoing commitment to the programme because I’m very conscious that they have so much to balance in their professional and personal lives. When it comes to commitment and pride you only need to look at the likes of Teddy [Okereafor], who’s played 45 consecutive games for his country, or Gabe Olaseni. And then there’s Dan Clarke. He’s chasing a 105th cap this weekend! The commitment of these guys is just next level and I’m proud to be working with them again this weekend.

GiveToLocal: Where do you start when it comes to preparing for a qualifier against a team with France’s talent and experience?

MS: Trying to prepare for the sixth best team in the world is far from easy. But these are the games that you want to be involved in as a player and a coach. We want to be taking on France and competing at this level year in, year out. Our goal is to qualify for Eurobasket and everyone knows that’s a tough ask. But we want to prove that we belong at that level and that means competing with the best in Europe. We want to be in the mix in 2022 but to do that we have to compete with France, Germany (ranked 18th in the world) and Montenegro (ranked 26th in the world). We’re the lowest ranked team in the group and the clear underdogs but we go into this weekend on the same 1-1 record as everyone else.

GiveToLocal: Does the underdog tag work for you?

MS: We do have that underdog tag and I suppose we have an underdog attitude. But I don’t want that to define us. I want to compete with the bigger nations and it’s about continuing our development. I want us to build on the hard work that we put in during the previous window and to make the country proud. We will have to earn our place at Eurobasket the hard way. But I’m confident we can do it.

GiveToLocal: Newcastle Eagles’ Rex Pflueger is a new name to the senior squad — what’s his story?

MS: Rex has been on the GB radar for some time now. He was identified by former head coach Joe Prunty and has been in contention for a number of years. Rex has been on our database for a long time and we watched his college career at Notre Dame very closely. He’s been in contention for a senior call-up since then. Nate was Joe’s assistant so Rex’s is a name he’s very familiar with. When he signed for Newcastle in the summer everyone involved with GB was delighted. Rex has had a great start to the BBL season and we’re expecting him to be fully recovered from the facial injury he suffered against Sheffield Sharks.

GiveToLocal: as well as your commitments with GB you’re heavily involved in basketball at grassroots and community level — what can you tell us about your move to Teesside Lions?

MS: Things are moving slowly at Teesside Lions right now but the return of grassroots sport across all tiers is great news. We were in full swing prior to the latest lockdown — following Basketball England protocol and preparing for the season. I’m still very excited about the ambition within the club and its plans for the future. I don’t want to come across as arrogant when I say this but I don’t see my future as a coach in Division Three. I want to coach at the highest level but I feel I’m in the right place at the right time with a club that’s going places. There are long-term aspirations for the Lions to compete at a much higher level and I’m keen to play my part in getting the club there.

Great Britain face France on Friday and Montenegro on Sunday in their Eurobasket 2022 Group G qualifiers. Both matches tip off at 6pm UK time.