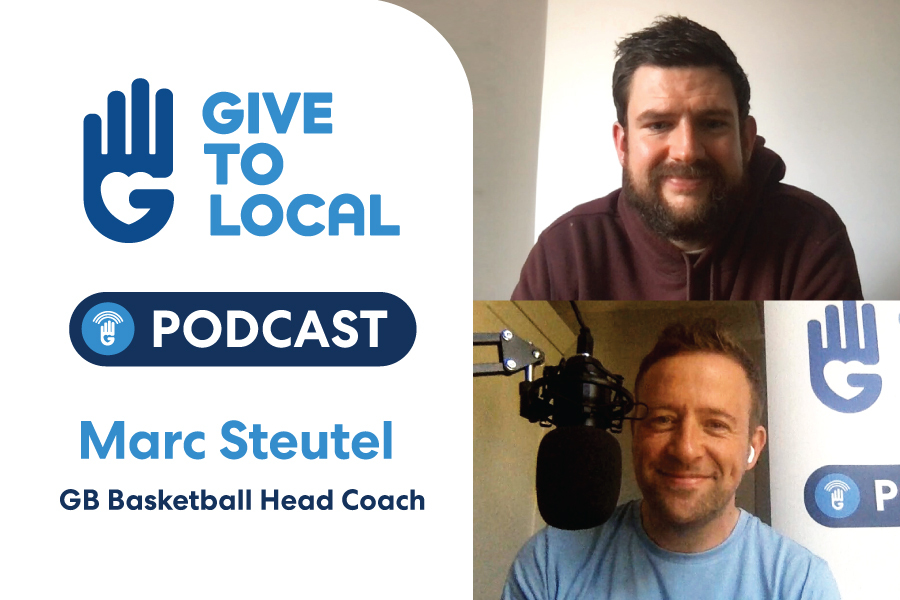 It’s been a whirlwind 12 months for Marc Steutel after being appointed acting head coach of the GB men’s senior basketball programme in February 2020!

But, as Marc told Justin in the latest episode of the GiveToLocal podcast, his success didn’t come overnight.

Marc has been a respected coach in British basketball for many years and had to put the hours in to get to the position he finds himself in today.

“Alongside my club coaching commitments, I’ve always made myself available for the national team,” said Marc.

“I think my first ever national team position was…I want to say the fourth assistant for the England Under 16s team in 2003!

“I had to pay my own way for that as well. I wasn’t complaining though, because the head coach gave me an opportunity to work at the European Championships taking place in Portugal that year.

“So, as a 24-year-old to have those kinds of opportunities was incredible.”

After taking his chance with the national team Marc continued to work his way through the ranks.

“I was given the opportunity to assist the Under 18s,” he added.

“After that I moved to the Under 20 team and, in the summer of 2018, I was given the head coach’s role. That was when we were competing in Division A – which is the highest level of basketball in Europe.

“We ended up with a couple of big wins and finished 10th which, at the time, was the highest ever finish for a Great Britain team.

“Then I was approached in November 2018 by the performance director who oversees all of the national teams.

“He said, based on what I’d done in the summer, that he wanted me to come on board with the senior team. And since then I haven’t really looked back.”

Catch the full podcast with Marc Steutel on our podcast page now — there's a chance to win a £250 Kitlocker voucher if you get involved with our giveaway by simply answering a question using the answer revealed in the podcast itself.