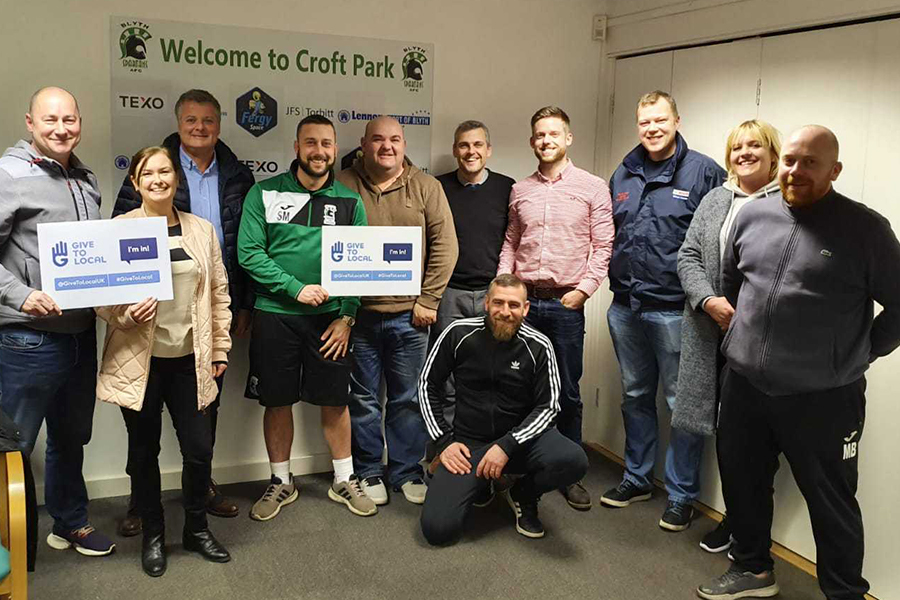 Blyth Spartans Juniors FC were boosted this month by a four-figure sum thanks to GiveToLocal’s innovative approach to raising funds and their club and local community getting behind it.

The Northumberland-based club is at the forefront of our initiative to connect clubs with donors and local businesses - and promote the value of those businesses to the local community.

And Blyth Spartans Juniors FC received nearly £1,300 in March alone in funding through GiveToLocal after successfully reaching out to families, supporters and local firms.

Raising funds for club improvements has always been central to the growth of grassroots sports clubs.

And with sport at every level shut down across the UK, due to the spread of COVID-19, clubs are facing an increasingly uncertain future.

But one of those clubs that is tackling the challenge head on is Blyth Spartans Juniors FC.

Chairman Keith Whisson is confident GiveToLocal can help thousands of clubs with similar ambitions across the UK.

“Their fundraising model means that parents and coaches don’t have to walk up and down touchlines on a windy Sunday morning trying to sell £1-strip raffle tickets or some castoff bottle of wine.

“They can just go and watch their kids play football and enjoy it, with money guaranteed through the minimal effort of signing up to and sharing GiveToLocal.

“From a manager’s point of view, you’re thinking it’s hard enough to keep the team together and playing games - let alone bring money in.

“The GiveToLocal method is a no-brainer because it takes that fundraising pressure off coaches.

“For me, GiveToLocal is really important because it will give every kid the same opportunity. And that’s what we stand for at Blyth Spartans Juniors.”

When Keith became a part of Blyth Spartans Juniors FC, he followed a familiar - and familial - path into the grassroots game.

“My son got involved and so did I,” he said. Like thousands of parents across the UK, Keith was hooked.

Having been with the club for more than 12 years, he now holds the title of Chairman.

It’s a role he relishes due to the positive impact it can have upon kids across Blyth.

“I’ve been with Blyth Spartans for a dozen years now,” said Keith.

“I worked my way up from coaching my son’s team through to the role of club Secretary and then to club Chairman.

“Personally, I believe that grassroots football in this day and age is about trying to get kids from a working town like Blyth involved in sport and the positivity that can bring into their lives.

“I firmly believe that grassroots sport can build character.”

Blyth Spartans are one of the North East’s most recognisable football clubs due to their legendary FA cup exploits.

They are also a club that is synonymous with the grassroots game thanks, in part, to their thriving Juniors section.

At the heart of football at this level are core values.

Whether it’s respecting your opponent, working together in a team or having the right attitude: these values are important to everyone who loves football.

But for Keith, there can be no more important a core value than equal opportunity.

And he has now made it his mission to ensure that every Blyth Spartans Juniors player receives the same opportunity, regardless of who they are or where they come from.

“What we’ve tried to do here at Blyth is put a bit more professionalism into grassroots football which will allow all of the kids here to have the same opportunity,” said Keith.

“We use a professional coaching company to ensure that we give our youngsters the best possible coaching available at a young age.

“For instance, we have professional coaches run our little Spartans program which is for four to six-year-olds.

“We know that parents care so much and give so much time to grassroots sport.

“But rather than put them into these roles and hope for the best, we thought that it would be good to have some professional coaching on board.

“That way, we’re giving all of these youngsters the best opportunity at a young age whilst also taking added responsibility off parents’ shoulders.”

Like all grassroots football clubs, Blyth Spartans Juniors faced a number of challenging issues – even before the coronavirus forced a nationwide lockdown.

Having been down to a handful of teams in the past, the club’s size has grown to an impressive 17 teams under Keith’s stewardship.

And while the Chairman is happy with the growth from within the club, he admits that they might need to start looking for some new grounds in order to cater for the local community.

“The biggest challenge for us is that we probably need a bigger ground,” said Keith.

“Where we’re at now, we have a large, middle and small pitch alongside some training areas.

“We’ve got drainage and also some very good facilities but we’re now at the point where we’ve got 17 teams - we’re bursting at the seams!

“I think we’ve just about outgrown the facility we’re at now and while it shouldn’t be a problem to find a new one it’s sometimes tough finding the revenue to help put that move into motion.”

With all of grassroots sport being postponed for the foreseeable future it would be easy for grassroots clubs to bury their heads in the sand.

But Blyth Spartans Juniors embody the spirit and determination common to volunteer-led clubs across the country.

And as key members of the GiveToLocal community the club is staying positive in the face of genuine uncertainty.

“To see Blyth Spartans Juniors remaining so positive during this unprecedented time is a testament to their character as a club,” said Neil Gardiner, Chief Executive of GiveToLocal.

“I am firmly of the belief that the only way that we can pull through this situation is by working together as a team and as a community.

“Now, more than ever, local grassroots clubs and businesses need our support.”

“At GiveToLocal, we will always endeavour to help those who need a hand.

“The spread of the coronavirus means the situation is changing almost daily but we have plans in place to react to that change positively.”