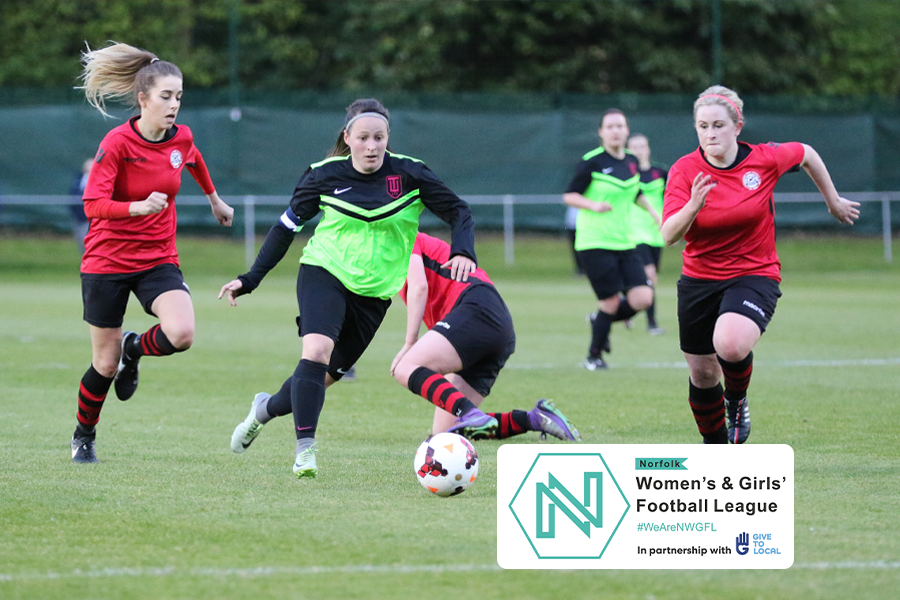 Hundreds of women and girls across Norfolk are taking part in the inaugural GiveToLocal Challenge Cup this spring as community football makes its long-awaited return.

The Norfolk Women and Girls’ Football League (NWGFL) has kicked off two new cup competitions to celebrate the return of grassroots sport.

And the best teams from across the county are battling it out to become the first ever GiveToLocal Challenge Cup champions!

“We’ve created two tournaments inspired by the Champions League and the Europa League.

“Teams finishing in the top two — and in some cases the top three — positions in the group stages will advance to the knockout stages of the GiveToLocal Challenge Cup.

“Teams finishing lower down will compete for the 4sports Challenge Vase.

“It means a great deal to be able to provide a football competition that allows our teams to experience some more competitive action this season.

“Just seeing the buzz back around grassroots football is fantastic and we’re delighted that GiveToLocal is associated with that buzz.”

GiveToLocal announced an official partnership with the Norfolk Women’s & Girls’ Football League in the summer of 2020.

With 13 divisions ranging from Under 12s through to senior women’s football, the NWGFL is a league that’s synonymous with grassroots football across the county of Norfolk.

And GiveToLocal’s Director of Strategic Partnerships, Colin Stromsoy, is delighted to see women and girls across the county getting back to football following a challenging year.

“When we partnered with the NWGFL last August I don’t think anyone imagined that so little football would be played between then and now,” he said.

“I was so pleased when I got a call from Ben to say everything was starting to happen again and that the decision had been made to stage the GiveToLocal Challenge Cup.

“As an organisation we couldn’t be prouder to be associated with such a great group of people positively impacting on so many communities throughout Norfolk.”