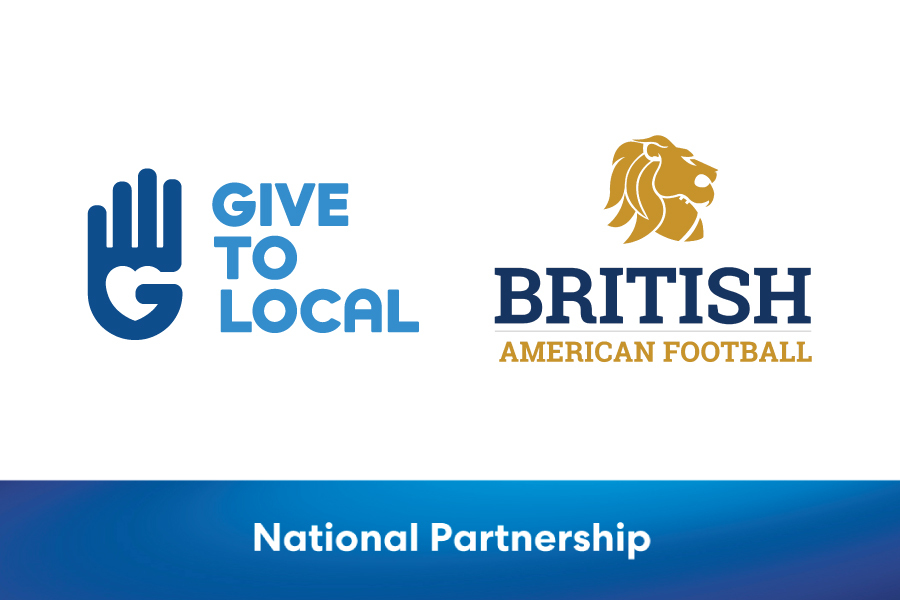 GiveToLocal is delighted to announce a new national partnership with the British American Football Association.

As the national governing body for American football across Great Britain, BAFA is responsible for all regulatory, competition, performance and development aspects of the game.

We sat down with BAFA CEO Pete Ackerley to chat about the future of the sport, its growing popularity, and why he’s excited by the national partnership with GiveToLocal.

‍GiveToLocal: Firstly Pete, how did you get involved in American football and BAFA? Where does your interest and love for gridiron come from?

Pete Ackerley: My interest in - and love for - American football comes from watching National Football League [NFL] games on Channel 4 way back in the 80s! That was my first proper touchpoint with American football and from there I became a huge fan. In terms of being involved with BAFA, I’ve got 30 years of experience working across multiple different sports. After working for the FA at Wembley and St George’s Park for the better part of eight years, I sort of semi-retired. But then this job came up with BAFA and it was probably the one role that gave me the biggest opportunity to make a difference in a sport. That’s what drew me towards BAFA and it really excited me. I’m really keen to build up a high performing governing body alongside a 10-year vision for the sport of American football. I want to be able to grow the game and inspire more people to get involved along the way.

GTL: With the NFL keen to push more games towards their International London Series, do you feel as though the sport is growing in popularity?

PA: Without a doubt, American football is really growing in popularity. Working closely with the NFL, we want to translate the fandom and eyeballs on the NFL in the UK into more people getting involved with the sport. We have the better part of 20,000 people playing American football across the UK and my job is to create a good infrastructure that allows the sport to be sustainable. I want to be able to take the sport into schools and colleges so we can create new links with them which could ultimately help us create a long-term development plan for the game. I’d love for us to be in a position where we are creating our own homegrown players who could one day play in either the NFL or the CFL [Canadian Football League].

GTL: American football is a game for people of all shapes and sizes. It is a sport where communication is key to all three phases of the game. What makes the sport so inclusive?

PA: One of the key points to make about American football is that it is a game for everyone. If someone asked you to draw a picture of an American football player, you couldn’t because there are so many different roles and positions on a team. You’re looking for people with different skill sets all over the field. There’s a role for anyone on a team and I think that it’s not just a game for a certain type of person. That’s part of the beauty of American football. You’re also part of a big team too, which definitely plays a big part in the sport’s inclusivity.

GTL: COVID-19 has left community sports clubs across the UK with a number of challenges. As we look forward to the resumption of sport, what sort of impact has coronavirus had upon grassroots American football?

PA: In essence, coronavirus has been very difficult for our sport because we’ve had to cancel our playing season. So there’s been no ability to play any kind of contact or non-contact football. COVID-19 came and hit us at the very start of our season so it essentially ended our season before it had even begun. The financial impact upon the sport, our clubs and BAFA as a governing body has been immense. The biggest challenge facing us now is getting people back playing American football next season. Now, we could just have the longest pre-season of all time and have everybody back and ready for it. But equally, we want to make sure that people are in a position financially to come back and play.    We still don’t really know what the medium to long-term economic impact of the virus will bring. That’s why this new partnership with GiveToLocal is pivotal for our clubs. It’ll enable them to access new forms of local fundraising and also allow local businesses to support their local clubs. That’s why we’re delighted to partner with GiveToLocal as it’ll give our clubs a variety of ways that they can raise funding.

GTL: How have you personally found the last five months?

PA: I think a lot of people have realised over the last few months is how resilient and strong people can be. One of the things that I’ve realised is that for the last 35 years in my working career, I’ve sometimes left the house and spent three to four nights away in hotels and airports. I’ve realised that I can still do an effective job from my own home and be close to my family. What I’ve learnt is I can create a better work life balance. I’m pretty much fed up of Zoom now…but equally it’s been a great tool to help navigate a new working environment. There are now more flexible ways of working. These last few months have changed my approach to how I work moving forward.

GTL: Everyone at GiveToLocal is delighted to have BAFA on board as our first national partner. How excited are you and BAFA by the new partnership?

PA: What I look for in any sort of partnership is a mutually beneficial relationship. Ultimately, I want our clubs to be more successful and more financially stable. I want to be able to grow American football across the UK. I want our clubs to be aware of all the support that is available to them too. That’s what really excites me about this partnership with GiveToLocal. I love the community aspect of it and the fact that it will allow clubs to become a bigger part of their local community is great. I’m really looking forward to building upon this relationship.

GTL: Is there anything in particular that has stood out for you so far about GiveToLocal?

GTL: With an eye upon the future, how do you plan to continue to grow American football across the UK? What plans do BAFA have for the future?

PA: I think right now, we have to set a long-term vision for the sport. Our strategy coming out around the early Autumn time will be a 10-year vision for American football in the UK. It’ll be focussed on looking at the impact of the current situation and what that means for the sport. Realistically, we also want to be able to grow participation in our sport. We want to be able to invest in the people within our sport and the places these people play. More importantly, we also want to create a long-term player pathway. I want to put a ball into every kid’s hand at six-years-old. I want to get kids used to playing the sport from a young age. And then one day, the dream for me is that one of those kids will play in the NFL.