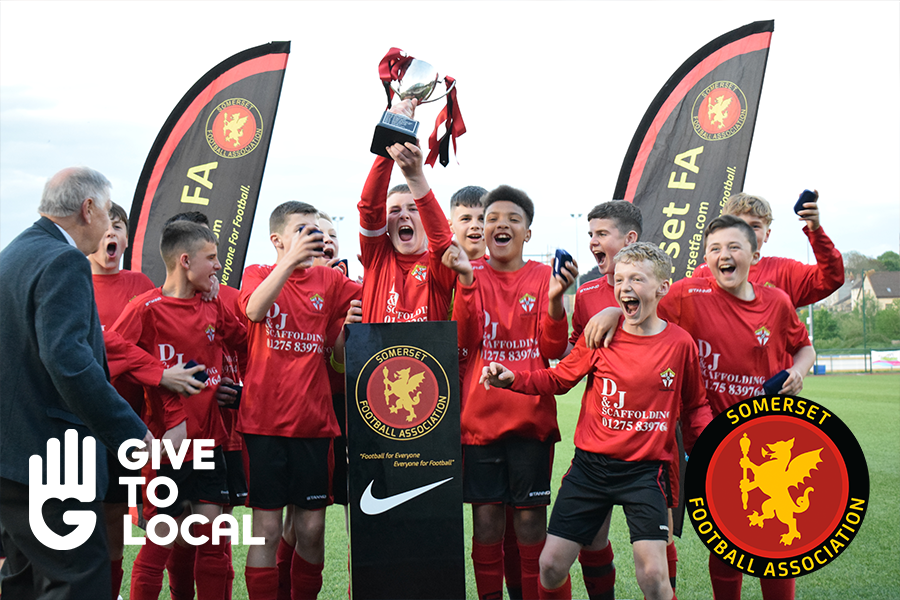 GiveToLocal is delighted to announce that Somerset FA has become the latest county football association to become an official partner.

The agreement between the two organisations will see Somerset and GiveToLocal work together to help clubs try to navigate the challenges brought about by COVID-19.

The partnership means that Somerset has now become the eighth county FA to enter into an official partnership with GiveToLocal.

And Conor Ogilvie-Davidson, Marketing and Partnerships Officer for the Somerset FA, believes that GiveToLocal has the power to galvanise community sport.

“It is vitally important that, as a community, we stick together and support one another through these tough times,” said Conor.

“Many clubs are struggling due to this season’s window for income generation being cut short.

“Often costs are still being incurred. This means that clubs are struggling with cashflow and a shortfall in their budget.

“We’ve entered into a partnership with GiveToLocal because of their focus on supporting community sport - that was a differentiating factor for us.”

COVID-19 has had an impact on almost all facets of life.

Across the community sporting landscape, many clubs are facing unprecedented challenges, particularly when it comes to financial sustainability.

At GiveToLocal, our focus is on connecting clubs to their local communities.

Clubs who are signed up to GiveToLocal are provided with a model that allows them to bring in a sustained level of income to help them plan for the future.

And Conor emphasised that the level of support afforded to clubs by GiveToLocal’s dedicated service team was what set the organisation apart from other platforms.

Conor added: “The support from the dedicated team at GiveToLocal will allow clubs to unlock the most from their networks.

“It will allow them to generate sustainable, extra income that will be of real benefit to them.

“You just don’t get that level of genuine support from real people at other platforms.

“Another added benefit of signing up to GiveToLocal is that it will also allow clubs to generate sustainable income over time, and not just for one off-projects, which is sometimes the case with other platforms.

“By signing up to GiveToLocal, it will allow clubs to spend more time getting it right, as they begin to work on their strategy for the future. It will ensure that everyone at the club is ready to go for when we return!”

And Conor’s positive message was echoed by Director of Strategic Partnerships at GiveToLocal, Colin Stromsoy, who is excited by the partnership.

Colin said: “Entering into an official partnership with Somerset is a really exciting move for GiveToLocal and we’re thrilled to be working with them.

“The challenges our communities are facing at the moment are vast and the future is full of uncertainty.

“This partnership will offer hope to many clubs and businesses across the county of Somerset and I’m sure we will see some great success stories very soon as we have in other areas.

“The whole team at GiveToLocal is delighted to be working with everyone at the Somerset FA and together I’m sure that we’ll make a positive difference which is ultimately, what it’s all about.”