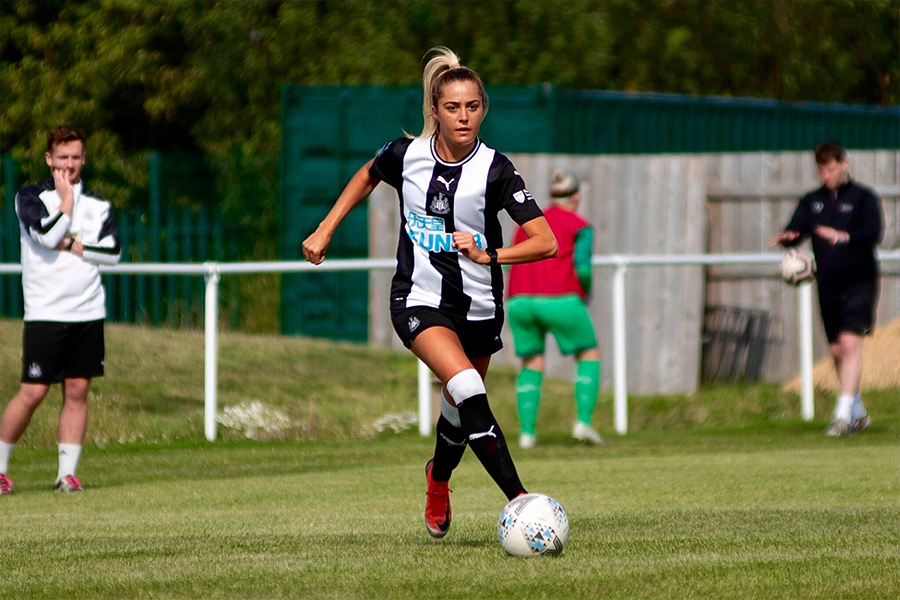 Maisie Cole knows just how massive an impact grassroots sports can have on the lives of young people.

Her experience playing at a young age set Maisie up for a successful career in sport — both on and off the pitch.

Earlier this year Maisie joined the GiveToLocal team as a Service Representative.

Prior to that she had just recently realised a dream of playing elite level football after being offered a contract at Newcastle United.

The Mancunian defender is uniquely positioned at GiveToLocal as someone whose grassroots sport experience directly impacted their adult life. And that’s why she’s so clearly passionate about it today.

“I remember being about six and seeing my big brothers go to football training,” said Maisie.  “I would ask my parents ‘why can’t I do that?’.

“But at the time it wasn’t really a thing for girls to be going to football. It hadn’t really taken off in the way that it has now.

“My dad eventually rang the coach and asked if I could go down for a kick about.

“That’s where my football journey started but I was obviously the only girl there!”

From that initial opportunity Maisie was given the chance to play for Manchester City Ladies from the age of 10. She stayed there throughout her time at school.

Maisie then moved to Newcastle to study sport development at university and started playing for the Northumbria team. A standout talent, Maisie was approached by Newcastle United.

“The university had a good partnership with United and our manager would mention it in passing,” said Maisie.

“One day she sat me down and asked if I wanted to come and play for Newcastle. Obviously the answer was ‘yes’!

“If I didn’t get that opportunity before university ended then that might have been me done with football.”

Having gone on to complete a Master’s in business management the opportunity to work at GiveToLocal seemed like the perfect pairing of both sport and business for Maisie.

“My whole degree was focused on the development of sport in communities and different foundation initiatives,” she added.

“So GiveToLocal, as an organisation, is putting into practice everything I’ve studied.

“It’s amazing knowing the impact we can have on grassroots sports up and down the country – it’s something that genuinely interests me and I’m really passionate about making a difference.

“Knowing that we’ve got things in place to make a massive difference to so many clubs excites me. It’s all just really positive steps in the right direction for the future of grassroots sports.”