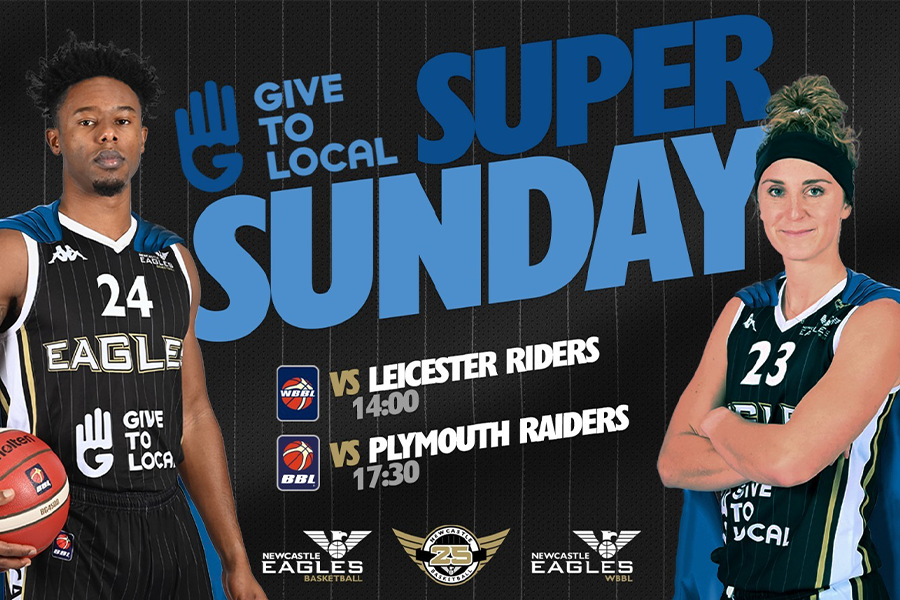 The first GiveToLocal Super Sunday sees both Newcastle Eagles teams in action on what promises to be a thrilling day of elite British hoops.

But prior to that mouthwatering clash, Chris Bunten’s WBBL side entertain star-studded Leicester Riders.

The double header showcases a community committed to basketball.

And as main sponsor of Newcastle’s top-flight basketball teams, GiveToLocal is proud to be supporting Super Sunday.

“Newcastle Eagles is synonymous with success at the highest level but the organisation also leads the way when it comes to playing a key role in the community,” said GiveToLocal CEO Neil Gardiner.

“That’s why we work so well together and why we’re proud to have such a strong relationship with the club.

“We’re looking forward to what promises to be an exciting Super Sunday and we want to wish Ian, Chris and all of the players the very best of luck.”

GiveToLocal’s support of basketball extends far beyond the ECA and earlier this month we rubber-stamped a national partnership with Basketball England.

That link-up will help support community clubs across the country look forward to a bright future and prepare for a post-lockdown return to action with confidence.

“We’re committed to backing basketball at every level and it’s a sport that can and does make a such a positive difference to communities,” added Neil.

GiveToLocal Super Sunday starts at 2pm when Newcastle Eagles WBBL host a Leicester Riders side which soared to victory at Caledonia Pride in the club’s first fixture of 2021.

“It’s fantastic to be to be tipping off GiveToLocal Super Sunday and we truly appreciate the continued support of Neil and his team.”

MacLeod’s BBL Cup finalists enter the fray from 5.30pm with former Eagles favourite Mike Morsell back on Tyneside with the Raiders.

The forward left Newcastle towards the end of last season after averaging 15 points and four rebounds per game for the Eagles.

Look out for full previews of both games and details of how to watch GiveToLocal Super Sunday live via the Newcastle Eagles website here.