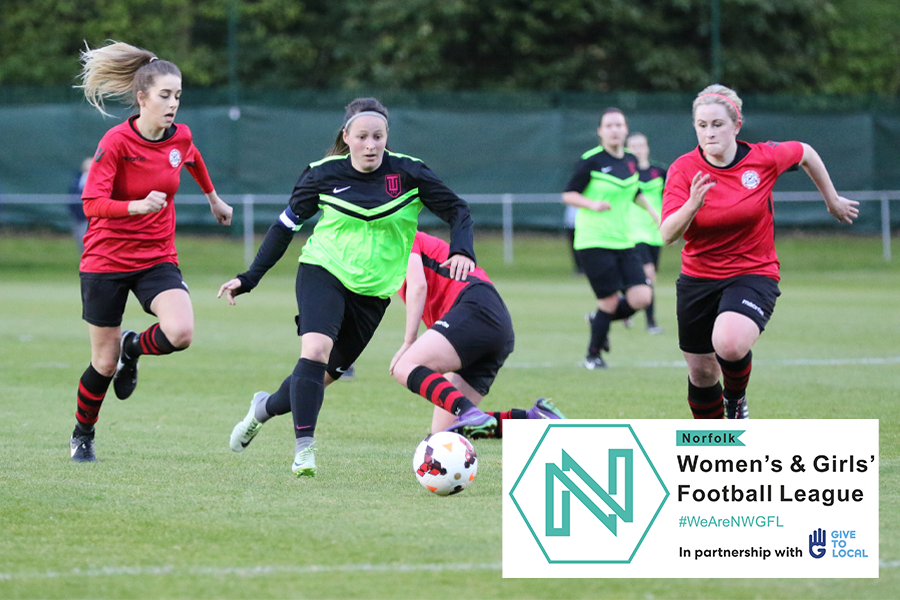 Having first become involved with grassroots football more than 10 years ago, Alison Moore has seen the coverage and engagement amongst women grow exponentially during this time.

Originally helping set up a team so that her daughter could have somewhere to play football, Moore also became part of the Norfolk Women and Girls Football League with the aim of championing women’s football.

After initially becoming part of the league as a Welfare Officer, Moore then took up the mantle of Chairwoman, with the leagues thriving under her stewardship.

“I got involved with football because my daughter, who was nine at the time, wanted to play football,” said Moore.

“When your own children want to get involved in something like that, you have to take it on.

“We all know about the boys’ teams but at the time I got involved with women’s football, the game was nowhere near the standard it is now.

“So that’s also why I got involved with the NWGFL. It was an opportunity to broaden my understanding of what was happening within women’s football at that level.

“That’s my story and how I got involved with women’s football.”

With 13 divisions ranging from Under 12s through to senior women’s football, the NWGFL is a league that wants to encourage all women to get involved in football.

Alongside their 13 divisions, they also run a developmental league for Under 10s and Under 11s to allow girls to find their place within football.

“At the moment, the league is broken down into three categories,” said Moore.

“We have developmental football, which is for Under 10s and 11s and the idea behind that is we want to just let them play so they can progress further.

“At the moment we have 19 teams in our development league.

“We have our youth leagues, which are for Under 12s through to Under 16s, and we have 57 teams in this category

“We also have our adult section where we offer both 11-a-side and 7-a-side leagues.

“We’re quite a unique league because the majority of leagues in Norfolk are either a youth league or an adult league - we are both.”

Like leagues across grassroots football, the NWGFL faces challenges that are sometimes out of their control.

It’s something which Moore acknowledges can be an issue in trying to retain female interest in football.

“One of the challenges we can face as a league is a lack of acknowledgement,” said Moore.

“Within our leagues, we have some really talented footballers at a young age and sometimes they don’t get the recognition they should.

“In addition to this, another challenge facing women’s football is the lack of access teams have to decent facilities.

“If a club has boys’ and men’s teams, we have seen that sometimes there can be facility conflicts.

“For instance, if the men are playing on there one afternoon and they end up tearing the pitch up, it might mean that the following day the ladies might not get a game.

“That doesn’t always happen, of course, but it does happen. We do see that happen at some clubs.”

But while she knows that there are challenges and hurdles facing women’s grassroots football, Moore admits that she gets so much joy out of football that the positives offset any negatives.

“There are a lot of things that I get out of grassroots football,” said Moore.

“If we look at the development side - when girls join football - it’s the beginning of their journeys.

“It’s lovely to see teams come together and grow.

“We’re now in a position where we can see teams that are progressing through the leagues from Under 10s through to playing ladies’ 11-a-side, which is really lovely to see.”

In an effort to remedy the issues facing women’s grassroots football, GiveToLocal wants to ensure a bright and stable future for the women’s game.

Whether it is through funding for kits or improvements to pitches and facilities, GiveToLocal’s mission is to help change grassroots football for the better.

And Moore was effusive in her praise for GiveToLocal, adding that it could have a lasting impact on both the NWGFL and women’s grassroots football in general.

“The big thing for us about GiveToLocal is that it would help our teams to grow and thrive,” said Moore.

“It would offer these teams financial support and opportunities whilst also bringing their club together.

“For us, that is massive.

“To see what GiveToLocal could offer our grassroots clubs with just a bit of help would be amazing and I know our teams would appreciate that.”