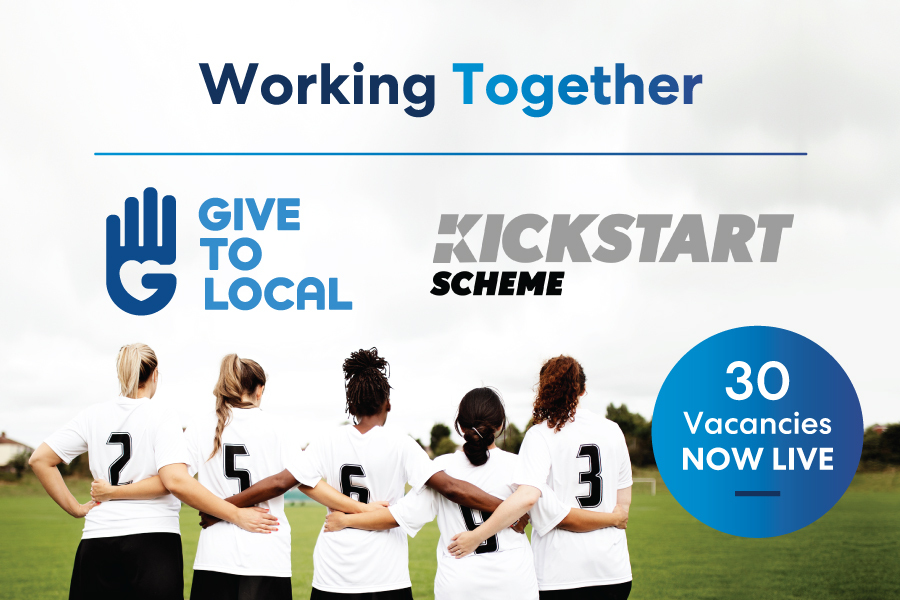 There’s never been a better time to get involved with community sport as clubs across the UK emerge from lockdown.

And we’re expanding our team to take on 30 new starters through the government’s exciting Kickstart Scheme.

So if you’re a young person looking for a fresh challenge then we might have the role for you!

The Kickstart Scheme was launched by chancellor Rishi Sunak last summer and offers young people receiving Universal Credit the opportunity to work for approved organisations and businesses for a six-month period.

Steven McCarthy, Business Development Manager, Harsav Group, said: “We’re contracted by the government to act as a gateway provider for the Kickstart Scheme in the region.

“And as soon as we saw GiveToLocal’s application to support the scheme it was clear that they’re an organisation with so much to offer.

“They’re opening the door to young people with real potential who, for various reasons, are out of work and receiving Universal Credit.

“GiveToLocal represents a fantastic opportunity for the right person to work for an organisation committed to supporting the local community and to learn key skills at the same time.

“There’s no doubt that the chance to work within sport will appeal to many potential applicants.

“There are more than 700,000 young people receiving universal credit right now and the more organisations and businesses that can offer them a way back into work the better.

“Kickstart is a great fit for a growing organisation like GiveToLocal and we’re confident this relationship can be mutually beneficial.”

The Kickstart Scheme is underpinned by £2 billion of government funding and aims to help thousands of young people get back into work between now and the summer of 2022.

Host organisations like GiveToLocal are supported through the application process — and with ongoing training for their employees — by gateway providers including Harsav Group.

And it is anticipated that the scheme will lead to apprenticeships or permanent roles for those people who have proved their potential at the end of the six-month placement.

“We’re all about giving as much as we can to the communities we work alongside and, in that respect, joining the Kickstart Scheme seemed like the most obvious move,” said Neil Gardiner, co-founder and CEO, GiveToLocal.

“Anyone and everyone who is passionate about sport should be interested in these roles. “The opportunities that we’re creating through the Kickstart Scheme will allow driven young people to directly and positively impact on their local communities.

“We’re confident that by utilising the Kickstart Scheme we can make a real difference — both in terms of broadening our reach in the community and by creating meaningful roles for ambitious young people looking to make their mark.

“We’ve identified the key areas within GiveToLocal that need support and we’ve clearly defined the processes within these roles that will deliver that support.

“It’s an exciting time to join a growing organisation and we’re looking forward to welcoming on board new members of the team.

“I’d like to thank Steven and the team at Harsav Group for all of their support so far and I’d encourage growing organisations and businesses across the North East to consider the Kickstart Scheme.”

Click here to find out more about working with GiveToLocal through the Kickstart Scheme.