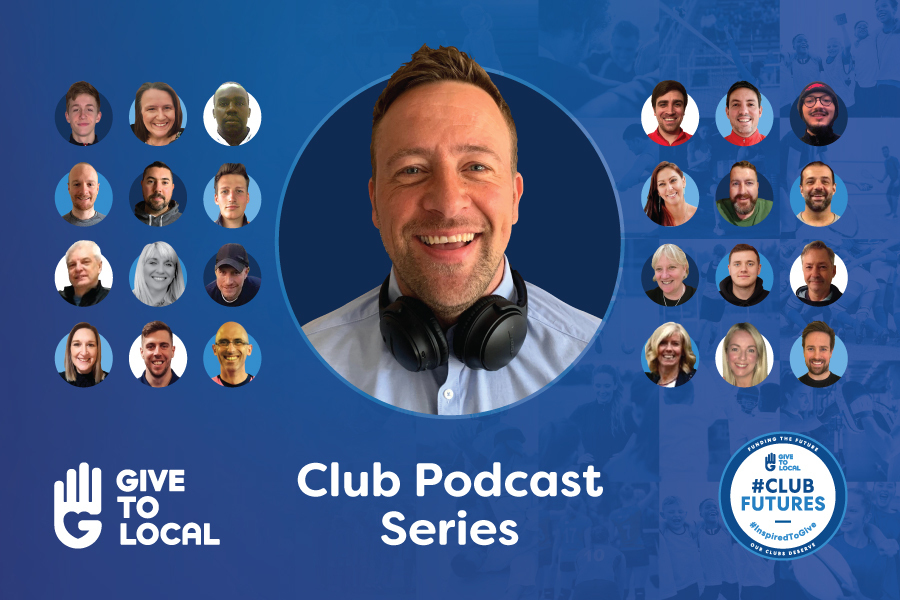 GiveToLocal’s Justin Lockwood has revealed that a new era of optimism and enthusiasm is sweeping the nation’s community sport clubs.

We set our award-winning presenter the task of catching up with our Focus Clubs across 21 sports ahead of the launch of our most exciting initiative yet.

And with the Club Futures campaign just days away Justin has been bowled over by the sense of positivity underpinning GiveTolocal clubs across the UK.

Justin will reveal all in a series of podcasts showcasing the very best of community sport and he said: “I think the timing of the Club Futures campaign is perfect.

“We’ve just come out of the most serious restrictions and everyone’s getting back to playing the sports they love.

“Seeing the joy in the eyes and hearing the enthusiasm in the voices of the people involved at grassroots level is just brilliant.

“A common theme as I talked to the various members of the clubs was the return of social contact.

“I think people have had enough of Zooms and virtual meets.

“The grassroots sport community is very sociable and always has been. Getting that face-to-face contact back has been a boost to everyone.

“I don’t think the majority of people have concerns about getting back to what they love.

“Volunteers up and down the country have made the return to sport as safe as possible.

There’s just genuine excitement at getting back out there.”

Justin is heavily involved in sport at every level and sees the benefits of community sport at first hand as a parent and a fan.

But even he wasn’t prepared for the wave of excitement common to each of his podcast chats.

“A lot of the people who I’ve talked to for the podcasts couldn’t contain their enthusiasm,” he added.

“They know how much their clubs mean to the local community in terms of participation and interaction.

“Reconnecting with familiar faces has meant so much to the people at the heart of our clubs in the last few weeks.

“That emotion was uniform across the podcasts.”

Justin also paid tribute to the volunteers who are ensuring the community sport environment has never been safer — following months of uncertainty and fear.

“My own kids are involved in community sport and so I’ve been able to get a steer in terms of how people are feeling and what needs to be done to ensure the safe return to sport,” he added.

“It’s amazing how the volunteers running our clubs have been able to get their heads around the new rules and regulations and been able to put new protocols in place.

“It’s become a full-time job for people who give up their time and experience for free.

“These people deserve a medal — in the most challenging of times they’re ensuring people can play the sport they love as normal.”

Justin caught up with a range of key figures from across the GiveToLocal community.

And he heard stories that, time and time again, underlined the importance of grassroots sport to people of all ages and abilities.

“I was speaking to Jenni from Dartford Hockey Club and she told me that she felt that sport had completely changed her life for the better,” he explained.

“She admitted that had she not taken the plunge and got back involved in grassroots sport then her life would have taken a completely different path.

“She didn’t feel like she had a lot of friends and admitted she’d been painfully shy.

“Jenni was daunted by the whole experience to start with but now she’s encouraging other people to follow her lead.

“She provided me with a fantastic insight into the true power of sport to improve lives.”

Jenni will feature on a future podcast with Justin.

And she said: “It seems to be the case with females where we’ve all taken a break from sport at some point in our lives, whether it be from school or to have a family or career. “Trying to get back into it is so daunting. It’s actually really terrifying.

“That first day of turning up at a training session I remember just feeling sick with nerves and thinking I’m going to look like such an idiot.

“But no one makes you feel like that. It doesn’t matter how rubbish you are, how many times you miss the ball.