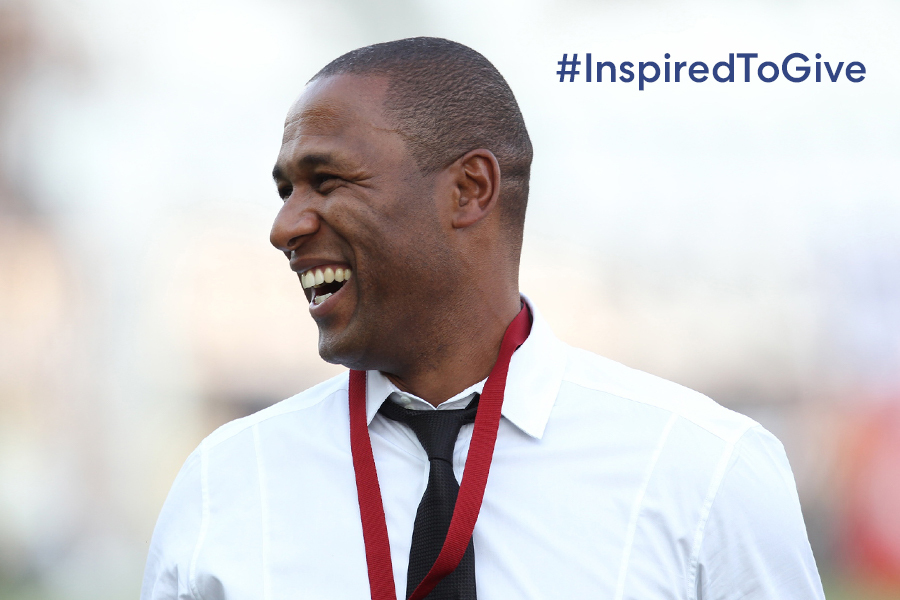 Les Ferdinand, Director of Football at Queen’s Park Rangers, believes there has never been a better time to support the grassroots clubs and small businesses at the heart of every local community. On the day we launched our #InspiredToGive campaign, the former England striker explained why.

GiveToLocal: What was your first experience of grassroots football?

Les Ferdinand: I joined a club called Viking Sports - there were six or seven of us from our school team who ended up joining and it was probably our first excursion into non-league type football. I do remember going there with my friends and seeing that the club had dugouts! It was the most professional set-up that we’d seen and it felt that way on and off the pitch. I got to a couple of finals with Viking, playing for the younger age group, and loved it there before I moved to Southall.

GTL: Was Southall a key staging point on the road to a professional career?

LF: They played in the Isthmian League and I went from the youth team into the reserve team and eventually into the first team. I played in an FA Vase final and they were happy times. At that stage, I was also playing for a Greek Cypriot team on a Sunday. I was just playing as much football as I could because I loved the game. That was my introduction to the non-league game and I was playing football for the love of it without any expectation of making a living from it. Of course, I wanted to play at a higher level but I never dreamed it would be a genuine career choice.

GTL: How valuable is the role of volunteers at grassroots and non-league level?

LF: Their contribution to grassroots football is absolutely vital. Without the people who put in the time and effort - travelling to games and making sure everything is in order on and off the field - there would be no grassroots football. People go above and beyond for the love of their club. They always have done and always will. There are so many people who made a difference to my career and my development during those early years in the grassroots game.

GTL: Can you describe the relationship between small businesses and grassroots sport?

LF: It’s very difficult to put a price on what that relationship means. When you think about the various organisations and enterprises that support football clubs at a local level it’s mind boggling. It would be very, very difficult for those clubs to survive without the support of the business community. It's a little bit of give and take. The clubs benefit from much needed revenue and the businesses can build on a positive relationship with sport. It’s a fantastic example of the community working for the common good. That’s why I loved my time in grassroots and non-league football. It brings together so many people from different backgrounds and they’re working towards a common goal. That sense of community underpins everything.

GTL: As a child what was your experience of grassroots sport beyond football?

LF: At school I played rugby and cricket and got involved in athletics. I never went as far as joining a club but in the summer, in the few weeks when there wasn’t so much football, I absolutely loved playing cricket. I can still remember scoring 37 not out for the school team and I was gutted that I didn’t get to score more because I was on a bit of a roll. I saw myself as a Vivian Richards-type player! He was my favourite player and I loved the fact that he and Ian Botham were both great friends and serious rivals. When I was at Newcastle, I managed to get a picture with both of them and it takes pride of place on the mantlepiece alongside all of my football memorabilia.

GTL: How important is QPR’s role in the community?

LF: If you look at the history of QPR in the community and the job that Andy Evans [CEO of QPR in the Community Trust] and his team has done it’s a major, major part of the what the club is all about. They’ve done an unbelievable job in terms of making sure that the club is at the heart of the community. As a club we are heavily involved in everything that the Community Trust does and now, more than ever, it’s a role we need to play. As soon as the coronavirus came into play we offered the stadium as a local NHS medical base - somewhere that supplies could stored and a space that could be used as a depot or distribution hub. Very early on in the crisis we made it clear that anything we could do to help then we would do it. We are continuing to monitor the situation and we’ll adapt what we can offer as things change. We’re well aware that donations to food banks are down so we are making sure we still support the local food banks. We will do our bit for the community now, as we always do, and I’m very proud of the fact that we position ourselves at the heart of that community.

GTL: Can you describe QPR’s relationship with the local football community?

LF: There are still a lot of local kids coming from grassroots football into our Academy and we have satellite centres across West London. Young footballers can develop their skills and those who are good enough get the opportunity to join our Academy where we can have a closer look at what they can do. It’s still very important to a club like QPR that we develop local talent and support the football around us.

GTL: GiveToLocal is encouraging communities to work together to tackle the coronavirus crisis - is that the way forward?

LF: For the good of grassroots sport and the good of our communities everybody needs to pull together right now. GiveToLocal has got that right. It’s not just the football community. This is affecting the global community. Everywhere we look, small businesses are on their knees and it’s down to communities up and down the country to pull together and recover together. That sense of unity is the most important thing. It’s the underlying factor here.

GTL: Can professional clubs act as a unifying force now and in the future?

LF: Football has a way of galvanising communities and professional football can have the biggest influence of all in that respect. Whatever the crisis, the trauma or the disaster, football can breed positivity and bring people together and right now it can be a vehicle for positive change. When we are finally in a position to resume our everyday lives, I have no doubt that football will still be able to bring people together like it always has done.

GTL: When you signed for Newcastle United did you immediately feel part of a community passionate about its sport at every level?

LF: Definitely…and it doesn’t surprise me that GiveToLocal is based in the North East. Without a shadow of a doubt that part of the world has always had such a passion for sport and a keen sense of community. I was very fortunate to play for Newcastle United for two years and during those two years the team was playing a type of football that brought everyone together. There was a sense that everybody loved their football team and everybody loved their sport. Lee Clark and Steve Watson used to take me to watch Sunday league games where their brothers or their cousins or their mates were playing. Back then the three of us could just turn up and watch a game and nobody batted an eyelid. That was when the sense of community around sport in the North East really shone through.

GTL: Does Newcastle United still have the potential to repeat the success of the mid 90s and early noughties?

LF: Definitely. Newcastle United is still strong enough and big enough to match the success of the Entertainers era and the Sir Bobby Robson years. The club has had its ups and downs for the last few years and the situation regarding the owner hasn’t helped. But things happen in cycles. I’m sure Newcastle will get back to the point they were - where everyone is singing their praises and appreciating the style of football they play. Steve Bruce is doing a good job in occasionally difficult circumstances and if you look at his record it stands up. He wasn’t the people’s first choice and I know that. But he’s got himself in there and he’s doing a fantastic job in my opinion.

GTL: Can Joelinton come back a stronger and more effective player?

LF: I think so. I’ve seen Joelinton play in the past - before he signed for Newcastle - and he’s a modern-day centre forward who can play down the left and the right as well as through the centre. He actually prefers playing on the left or right rather than through the middle but I accept that he has the look of a traditional centre forward. He’s got all of the attributes to do well at St James’s Park and I honestly believe he can come back stronger given the chance. There are huge pressures associated with wearing the number nine shirt for Newcastle when you consider the people who have worn it before. I hope the fans continue to get behind Joelinton and realise that just because he’s not a traditional number nine it doesn’t mean that he can’t be a real asset. He works so hard for the team and deserves support.

GTL: Finally, do you feel Spurs can kickstart their season if and when the Premier League returns?

LF: If and when the Premier League resumes it’s going to be tough for Tottenham. But the fact that this season has been delayed could do them the world of good. Harry Kane and Heung Min Son have been badly missed but they’ll be back in contention when football resumes. That will make a huge difference as they were lacking a centre forward before the league was suspended. To have Kane and Son ready to hit the ground running could be just what Spurs need to finish the season in style.