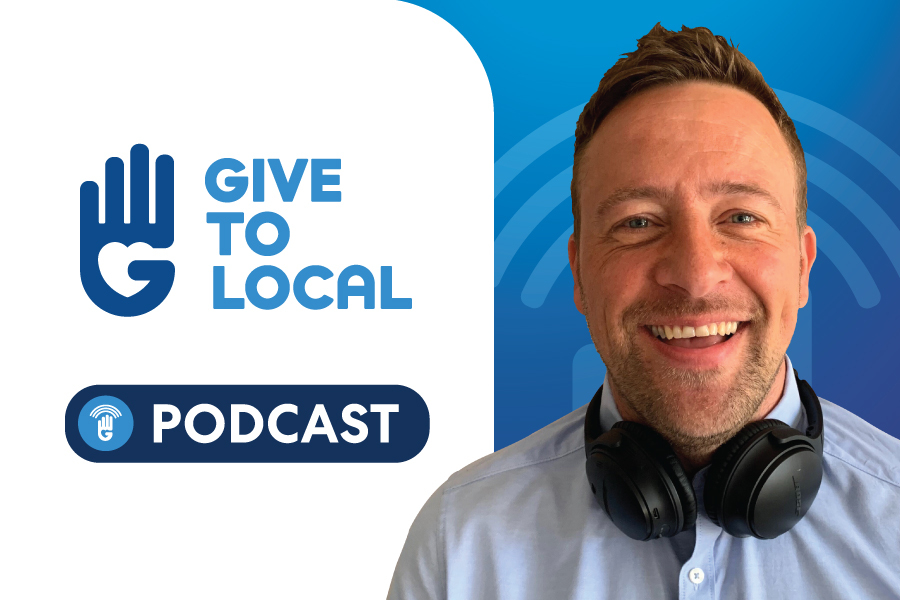 Launching in August, guests on the GiveToLocal podcast will include a mixture of household names, grassroots stalwarts and business leaders who share a passion for using the power of sport to promote health, wellbeing and a connection to local communities.

We sat down with Justin to find out more about the man behind the mic, his route into broadcasting and his hopes for an exciting platform for grassroots sport across the UK.

Justin Lockwood: I’ve really enjoyed the journey so far! When Neil first approached me and asked me to get involved, I could see how passionate he was about the organisation. I must admit, I was intrigued by what was going to happen with it. To see so many teams suddenly get involved and be able to grasp the concept - and be able to understand what you’re trying to do - has been really pleasing. Some of that explaining falls on my shoulders. Being able to explain things clearly and succinctly is important but sometimes I’m trying to cut out all of the waffle that comes along with being a presenter! I feel like things are really going from strength to strength. It’s been great seeing clubs winning stuff from the giveaways and new corporate partners coming on board to support that too. It’s been enjoyable seeing GiveToLocal grow…and it’s growing quickly!

GTL: Can you describe your path into broadcasting?

JL: It was a really strange path in some respects! I originally wanted to be in the RAF and I’d spoken to them about sponsorship and attending officer school. I’d gone quite deeply into that. But, when I was a kid, I used to mess around doing these daft commentaries on computers. I’d do commentaries on my own games which sounds absurd but when you’re 13 it makes complete sense. One day, a guy who happened to work part time for a local radio station came round to our house because he sold insurance to my dad’s business. He heard me commentating and told my dad that if I loved doing stuff like that then I should get involved with Hallam FM, which was our local commercial radio station. Obviously, back then, we didn’t have as much in the way of streaming - or even live football - for that matter. But radio was a big player in commentary and I ended up going in for the day and I just fell in love with the whole environment. It was like magic. I turned full heel on the RAF and decided I wanted to go into broadcasting. So I made journalism my route into the field and I worked voluntarily for Hallam FM for about 18 months on their sports show. And then looking a bit further down the line, it was a case of being in the right place at the right time. A job came up in their newsroom for a news and sport journalist and they asked me to interview for it. That was it. It was my dream job and I felt like I’d won the lottery. In many respects, it’s never felt like work.

GTL: How did you find your feet as a commentator?

JL: I’ve always been the kind of person who’s said ‘yeah, I’ll give that a try’. With football commentary, my involvement in that side of broadcasting came about as a result of a chance conversation. Someone needed a commentator and asked me if I would do it. About two weeks after that, I got a call from Sky who basically asked the same thing. They told me they needed a reporter at a Sheffield Wednesday game on a Saturday and asked if I could fill in for their normal reporter, who was away. From that moment on, I ended up being part of the Sky Sports Soccer Saturday team for the best part of eight years. That’s when my career started to really get going, but it’s almost like it’s happened by chance! I never really had a gameplan. I never had a moment where my plan was ‘I want to do this 100%’. I’m a big believer in fate and I’ve always thought that everything happens for a reason.

GTL: After your stint covering sport across Yorkshire and the Midlands, you settled down in the North East. How did you end up there?

JL: I was really happy at Hallam FM but my boss left the station to join Metro Radio. Weirdly, I bumped into him on a night out and he told me that he had the perfect job for me. Naturally, with it being a night out, I thought ‘oh yeah, definitely, sounds great’ without ever thinking anything would come of it. Those conversations happen all the time in broadcasting. Anyway, two months later, he gave me a call and asked me whether I’d be interested in heading up our sports coverage at Metro. At the time, they would do a full match on both Sunderland and Newcastle and it was probably one of the more sought-after roles that you’d find in commercial sport outside of London. So I said ‘yes 100%’ and I ended up getting involved with the Newcastle United commentary which was great fun.

GTL: You’re going to be heading up GiveToLocal’s new fortnightly podcast. How excited are you by the prospect of it?

JL: A lot of the time in radio, we’d have guests live on air. The discipline with commercial radio is that everything has to be short, sharp, in and out, on and off. Even with an interview, most producers would say I don’t want it to be any longer than two and a half minutes. Realistically though, if you had a chat with someone and they said you’ve only got two minutes, it would be one of the worst chats in the world! The interviews I used to relish were the ones where we’d sit down with people, have a proper chat and really get to know them. I remember doing an interview with The 1975 which never got to air but we had a great chat and there was so much going on with them being so interesting. Podcasts are so different to commercial radio because they’re like an open space. An interview can go off in all sorts of different directions and there’s no pressure to move it in any particular direction either. It’s about where the conversation needs to go and that really excites me. I love getting to know people and with the GiveToLocal podcast, it’ll be like having a blank piece of paper and filling it with whoever we have on. I enjoy speaking to all kinds of people but I love talking about sport. Everyone’s got a story and I love finding out people’s individual story! For me, an interview is about listening. It’s about listening to your guest so I’m really excited by the prospect of the podcast.

GTL: With the podcast focusing primarily on people involved with sport, how excited are you by the prospect of being able to hear individual sporting stories from all across the UK?

JL: One of the things that I used to adore when working in news and radio, was every single day was different. No two days were ever the same and no two interviews were ever the same. Every story had its own unique quirk or intricacy. I think the same can be said with a podcast too. You never know where you’re going until you’re up and running. It’s a completely blank piece of paper and there are no rules. It’s an open discussion to fill with whatever greatness comes from whoever we’re talking to. We’ll see where it can go and I’m sure that we’ll be able to hear the stories of a wide variety of people through the podcast.