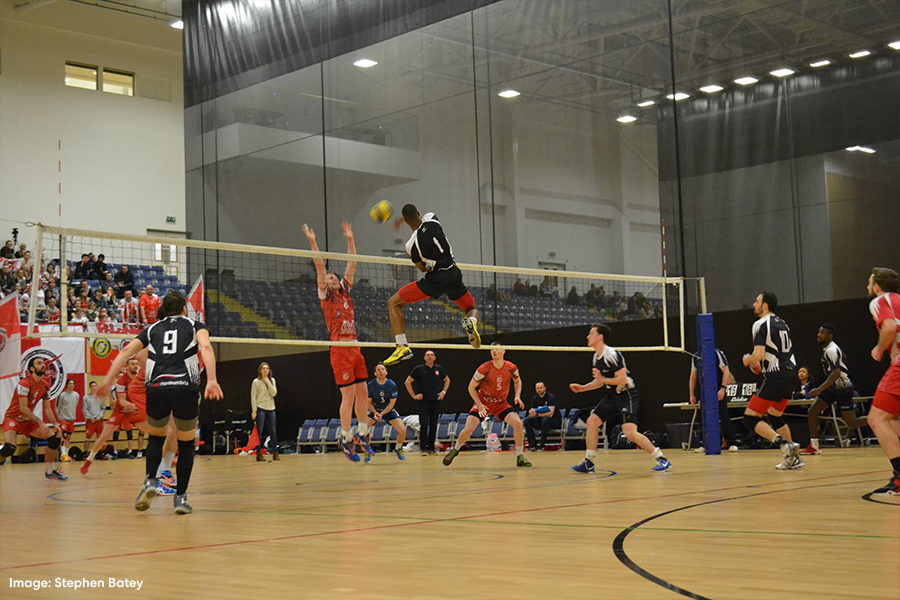 Such is Peter Bakare’s keen sense of community that he was scouted by the producers of cult E4 show Skins as they sought to add a much-needed dose of reality to their fledgling comedy drama.

As the 17-year-old son of a single-parent mother, an ability to articulate life in inner city London - with a smile on his face - struck a chord with TV bosses chasing authenticity.

And back in 2007 it seemed scriptwriting was the future for a multi-talented teen with the world at his feet.

But even Peter couldn’t have imagined the chapters to come in a truly remarkable life story.

“I was 17 when I got the chance to work on the Skins’ scripts,” he recalled.

“It was a God given opportunity. Not long after that, I started playing volleyball.

“I loved the work I was doing with Skins but I struggled to do both - and complete my college work.

“In the end I chose volleyball. I loved the sense of community and the fact that everyone was working towards a common goal.”

Now in his early 30s, the entrepreneur, public speaker and sporting ambassador still beats the drum for volleyball.

And a sport without any central funding - despite its key contribution to communities across the country - needs all of the support it can get in 2020.

“In many respects volleyball in the UK is more resilient than most sports,” added Peter.

“Everything - from top to bottom - is delivered by a dedicated army of volunteers.

“There’s a real sense of community and a feeling of camaraderie. Everyone gives up their free time to keep the sport going and that includes senior internationals!”

At the London 2012 Olympics, Peter represented Great Britain’s volleyball team inside a bouncing Copperbox Arena - just a stone’s throw from his family home.

One week he was rubbing shoulders with Serena Williams, Usain Boult and Kobe Bryant in the athletes’ village.

And the next he was filling in score sheets and acting as a line judge back at his former club on Tyneside.

“You do a bit of everything if you’re involved with volleyball in the UK,” admitted Peter.

“There’s no money for table officials, line judges or transport from game to game.

“And that’s at the top level of domestic volleyball!

“It ensures that the best players in the country remain grounded and in touch with the grassroots game. And that’s a real positive.

“There were times during my playing career that I’d crawl into the shower after a five-set match against one of the top teams in the country only for the coach to drag me out again because the women’s team needed a line judge!

“But I loved all of that. I enjoyed doing my bit and it made me realise what a fantastic and invaluable job volleyball’s volunteers do on a daily basis.”

Eight years on from London 2012 and volleyball in the UK continues to struggle to make ends meet.

And Peter described GiveToLocal’s decision to include his sport in our #InspiredToGive campaign as ‘a Godsend’.

“I’ve seen the difference that the organisation has made to football but it can genuinely transform the fortunes of volleyball at a grassroots level,” he added.

“Volleyball clubs don’t always have a great profile in the local community and yet the work they do behind the scenes makes a huge difference to so many people.

“If the volunteers running these clubs could rely on a regular monthly income through GiveToLocal, it would open up a whole new world of possibilities.

“Those people who find their time taken up by fundraising and paying the bills could focus on more meaningful work within their clubs.”

Peter is a familiar face in schools and clubs across the UK as he continues to teach the value of sport in terms of improving physical health, mental wellbeing, team-work and confidence.

“Without the key contribution of community sport in my teens, I wouldn’t be where I am now,” he added.

“I wouldn’t have represented my country at the highest level, met so many wonderful people and global influencers and been in a position to make a difference through sport.

“We need to make sure that there are still places for kids to go when everyone is out of lockdown and looking to rebuild their local communities.”

Peter Bakare delivers motivational talks to schools and businesses across the UK and created the NutriTroops healthy living brand. For more information contact him via peter@nutritroops.com