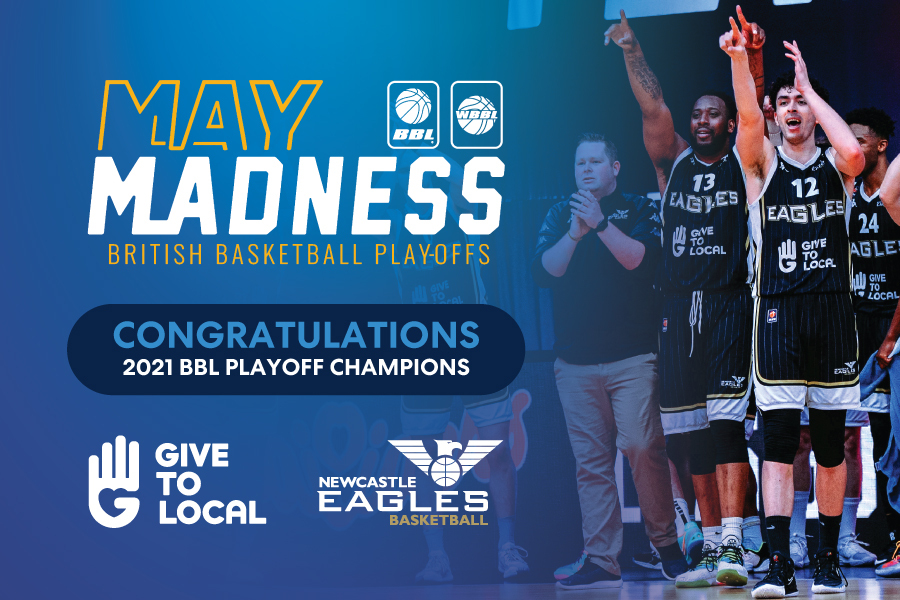 Everyone at GiveToLocal would like to congratulate our Newcastle Eagles on a fantastic finale to a thrilling season.

Both the men’s and women’s teams made the BBL Playoff finals at Leicester’s Morningside Arena.

And although the women couldn’t quite make it a hat-trick of top three scalps following a fairytale run to the final, the men claimed a record-breaking seventh Playoff title.

“It’s been wonderful to watch both teams realise their potential this season and fly the flag for community-based sport at its very best,” said GiveToLocal CEO and co-founder, Neil Gardiner.

“Newcastle Eagles manage to win trophies at the top level year in, year out but it’s what they do within the community that marks them out as a truly special organisation.

“That’s why we’re so proud to be their partners and why they’re such a perfect fit for GiveToLocal.

“I want to extend my personal congratulations to Ian MacLeod, Chris Bunten and all of the players for doing such a great job this season.

“But none of this success would be possible without the commitment of Paul and Sam Blake.

“The work that they do with the Eagles and the Eagles Foundation, to put community sport front and centre across the North East, is second to none.”

GiveToLocal confirmed its partnership with the Newcastle Eagles last year.

And we’ve followed the rollercoaster fortunes of the organisation’s elite teams all season.

Newcastle’s women had captured the hearts of a nation after knocking off the WBBL’s top two teams, Sevenoaks Suns and Leicester Riders, to reach the 2021 Playoff final.

But London Lions, who finished third in the regular season, proved a challenge too far for the beaten but unbowed Eagles.

Head coach Chris Bunten said: “It’s a shame that the fairytale had to end on the final day of the season.

“But of course we’ll look back on the last couple of weeks with a great deal of pride when we think about what we’ve achieved against all of the odds.”

The 2021 BBL Playoff final went down to the wire before Ian MacLeod’s men finally clinched a dramatic 68-66 win against London.

Newcastle added the Playoff crown to this season’s BBL Cup and Ian said: “I'm very happy. “We're three of three in finals after the most difficult year that most of us will ever remember.

“That's success. But what else is success to us? Themba Yabantu playing 27 minutes in the game at Bristol and not looking out of place, when he came to us at 10-years-old.

“There are lots of different measurements of success. Externally it looks like trophies and we have two of those this season!”