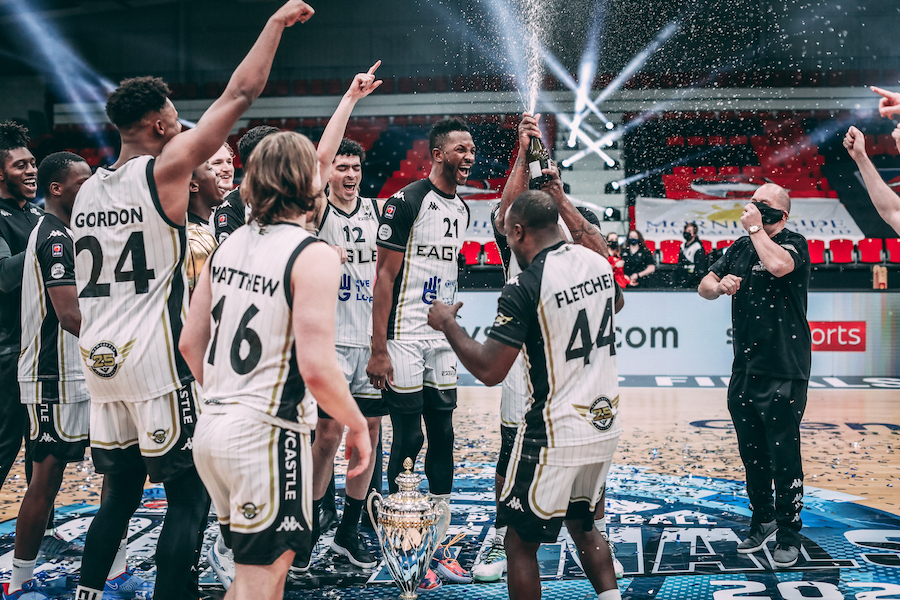 The GiveToLocal backed Newcastle Eagles are the new BBL Cup champions after defeating London Lions in a tense final live on Sky Sports.

Ian MacLeod’s men led for most of the game before London launched a second half comeback.

And Newcastle needed to dig deep down the stretch to claim a seventh BBL Cup title and secure the franchise’s 26th major trophy.

“I’m just going to enjoy this time with my team before we get back to regular season business,” said MVP Justin Gordon.

The BBL rookie added 15 rebounds to his 17 points on a day to remember for the all-action forward.

And Gordon added: “I just wish our fans could been in Leicester to enjoy the win with us.

“It’s been a tough year for everyone and we know how much this victory will mean to all of the Eagles supporters.

“We wanted to bring the Cup home for them and we’ve done it.”

GiveToLocal was announced as main sponsor of the Eagles at the start of the season.

And a partnership which aims to support basketball at every level continues to flourish in spite of the global pandemic.

“I’m incredibly proud that GiveToLocal is such a valued partner of the Eagles and I want to congratulate Paul Blake, Ian MacLeod and all of the players on another job well done,” said GiveToLocal’s CEO, Neil Gardiner.

“The final was a wonderful advert for the BBL and London deserve great credit for making it a match to remember.

“I’m sure I wasn’t the only Newcastle fan on the edge of my seat during the final quarter but what a way to finish!”

Earlier this month GiveToLocal announced a new national partnership with Basketball England which further reinforces our support of the sport across the country.