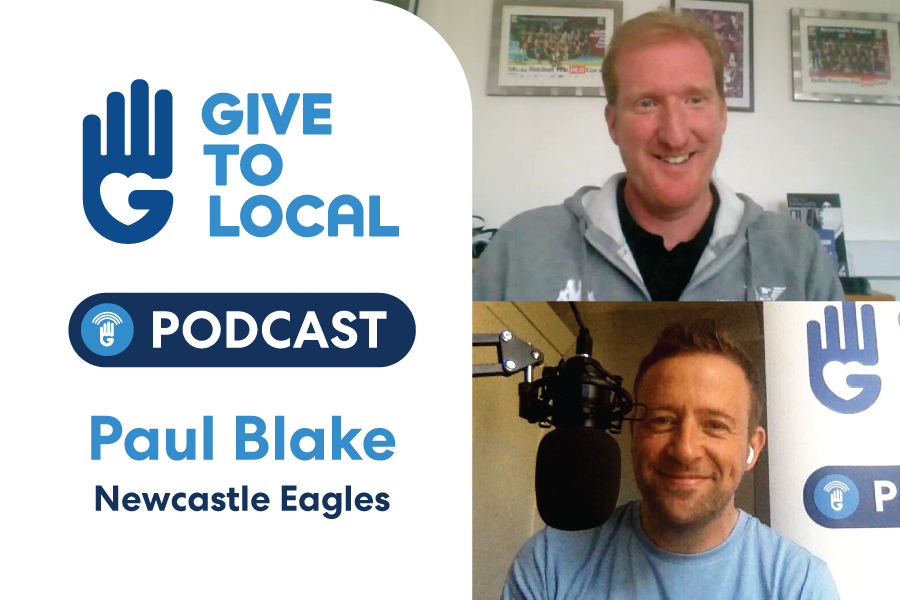 Newcastle Eagles Managing Director Paul Blake joined Justin Lockwood for the third instalment of the GiveToLocal Podcast to reflect on his highlights at the club, what got him into sport and the challenges facing the club in 2020.

Before becoming the MD of what was to be the most successful British basketball club in history, Paul Blake was just a kid with a burning passion for sport.

“Football and basketball were my two sports as a kid,” said Paul.

“I was the goalkeeper in football and played at my school from 12 years of age. I got better at it and I ended up playing a bit of National League for a few years.

“I was playing for four football teams on a weekend at one point, I couldn’t get away from it. And cycling to every one of them – I loved it!

“I think kids will get engaged in sport if you give them the opportunity to do that, there’s a demand there.

“That’s what we’ve tried to do here at the Eagles: cater to that demand by building multiple clubs in multiple venues so that a young kid doesn’t have to go more than a mile or half a mile to that club.”

Paul finally got his break into the professional side of sport in 1997 with Newcastle United Sporting Club, an ambitious venture that was home to the city’s basketball, rugby and ice hockey clubs.

“I got the job as marketing manager overseeing the Eagles, Falcons rugby and Cobras ice hockey,” continued Paul.

“The history with Newcastle United Sporting Club is that it didn’t succeed as a three-year project and the Eagles had to pull out.

“I was then offered the opportunity to take the club on with my then boss, a chap called Ken Nottage, who was chief executive at the sporting club – it cost us £1.

“That was 1999. It’s been a rollercoaster ride from then onwards!”

Watch the full podcast with Paul Blake ahead of Newcastle Eagles’ BBL Cup clash with Leicester Riders on Friday November 13 - there's a chance to win a £250 Kitlocker voucher!