NFL Star Checks In With GiveToLocal 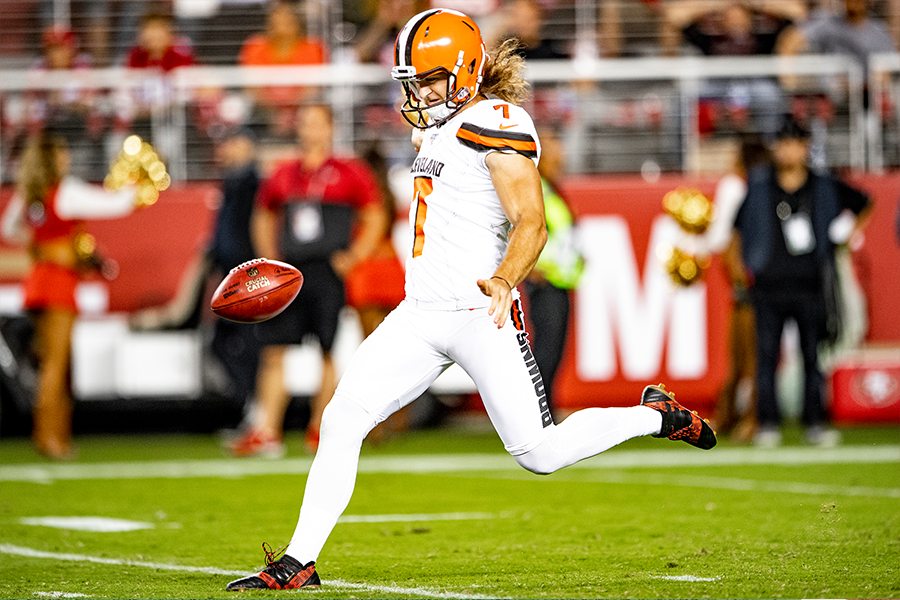 Jamie Gillan - aka The Scottish Hammer - is one of the few British players plying his trade in the NFL. Ahead of this month’s big kick-off, the Cleveland Browns punter spoke exclusively to GiveToLocal.

GiveToLocal: Can you recall your earliest memory of playing sport and how you felt back then?

Jamie Gillan: It would be playing rugby or football with my friends. Not American Football but soccer as they call it over here! Anything to do with sport and I just loved playing it. I don’t remember being awkwardly competitive but when the heat started rising I definitely enjoyed it more.

GiveToLocal: Which sports did you really enjoy at a young age?

JG: It was always Rugby Union but I did play a lot of football with my mates. Everybody picks up a football back home. Sport was the only thing I really liked or was good at when I was a kid and I picked up everything I played pretty fast. I played badminton and played golf with my grandfather - I still play golf now and love the game. I played cricket and tennis when I was at boarding school and the only thing I didn’t enjoy was swimming. I’m not an underwater guy - I can’t stand not being able to breathe!

GiveToLocal: What are the benefits of playing sport as a kid?

JG: A huge aspect is making friends outside of school but there are so many positives. Playing sport helps you sleep at night and releases all of those good endorphins. You’re making friends and competing with friends. And when you reach a certain level you have coaches who can be really harsh on you but they’re teaching you not to be soft and preparing you for a competitive environment. You learn a lot of stuff about life and what you’re going to encounter in the future. Sports like Rugby Union and American Football are team sports where you rely on your team-mates and you work together for the greater good. You often have to put your body on the line. Sport teaches you a lot about yourself and how to be good to others. If you get hooked on sport as a kid it can be really key to your growth. You can tell if someone has played sport or not growing up…and you can often identify the people who’ve never played sport!

GiveToLocal: Was there a grassroots sport coach - either at a club or your school - who made a lasting impression on you?

JG: Definitely. You know, at any level, the coach can make or break you. I’ve had some awful coaches and I've had some phenomenal coaches. One of the guys that sticks out for me from a young age was a guy called Donnie Flockhart - one of my best bud’s Bruce Flockhart's dad. Donnie and my dad coached me at Highland Rugby Club. Donnie taught me my love for the game and showed me what the ‘team’ means in terms of tradition and caring about one another. He instilled in me that attitude of wanting to go out in the field, ‘kill’ the other team and come out on top with that fire in your belly. I had a couple of good coaches at boarding school but what I’ve realised is that there’s a totally different style to coaching Rugby Union in Scotland to coaching American Football over here! It’s a completely different culture. Coach Mike Priefer, who I work with at the Browns, is awesome and we work really well together as he wants me to strive to be perfect. But I know some of my friends who would definitely have had the chance to play American Football at a higher level had they not been butchered by coaches back in high school or wherever it was.

GTL: Why was Rugby Union the sport for you?

JG: Ultimately it was the team aspect of it. It’s not like American Football where you have 80 or 90 guys on the squad - you’re good pals with about 10 of them because there are just too many people to be friends with! With Rugby Union you’re generally tight with all of the other 14 players on your team and you’re working together to achieve one goal. It’s also just the adrenaline around the game and hitting people and always being involved. That’s been the one thing that’s been a little bit difficult for me - and something I’ve struggled with - transitioning to American Football. Taking a back seat and just being the punter isn’t really me! But I’m here for the right reasons and I love what I do. I do miss that aspect of running, hitting and coming away from practice with fumes coming off your shirt because you’ve worked so hard and then having a really good sleep afterwards. I miss all of that stuff.

GTL: Does grassroots sport promote a sense of community?

JG: The thing I love about sport in Scotland is that nobody puts a big emphasis on high school sports like they do here. That’s a hot topic around club rugby and high school rugby back home - it is seen as something that you do with friends and it’s part of the community. And the people involved with the clubs do a phenomenal job in terms of creating that sense of community. A lot of the fundraising comes about through people who know people. Maybe it’s a mate of a mate who works for a whiskey company and he’s prepared to throw in a bit of sponsorship. We’d raise our own money for overseas trips and tours and the clubs back home are great at doing that.

GTL: We’re working with the British American Football Association (BAFA) to help the game at grassroots level in the UK - how important is support for the grassroots game in Britain?

JG: It's extremely important – as is getting the game into schools. Kids need to get an itch for the sport. I suppose with rugby all you need is a mouthguard and some cleats and you’re good to go but American Football equipment can be really expensive. There’s the health and safety aspect and all of the different coaches. The big difference in America is that it’s worth players investing in all of that at a young age because there are $150,000 scholarships,  university educations and the potential to play in the NFL on offer. Maybe it’s a case of getting some British kids over here and creating a core of really competitive university teams in the UK. That could help to kickstart the grassroots game back home.

GTL: What’s your experience of grassroots sport in the US?

JG: The only experience I've had is with rugby. I travelled really far to play and practice and then I realised I was playing with a lot of people who don’t know much about rugby and just had a football mentality. It was just about smashing each other and we’d be going out and playing on a baseball field that had been marked out to replicate a rugby pitch. Or even worse, we’d be playing on a field where there was dog faeces everywhere or glass on the pitch. There were no changing rooms and there was no pub or drinks afterwards! But rugby is one of the fastest growing sports over here. There are more people playing and there’s a movement to get even more people involved. I think it’s a case of making it more like the other university sports over here and changing the mindset.

GTL: How important is it for the professional clubs at the top end of any sport to support the growth of the grassroots game?

JG: It's really important. Until I joined the Browns I didn't realise just how much kids can look up to certain players and how much of a positive impact we can have. Just your words or actions - or hanging out with them - can make a huge difference. You never know what might be going on at home with some of the kids we talk to and it’s just a case of trying to offer the right advice and do what we can. Some of them want to be you and want to play American Football and because you’re not a teacher they might actually listen to you! We’re not shouting at them to do their English paper but because we’re doing something that they love we might be able to encourage them to do their homework or make some kind of small difference. Little things can often go a long way in situations like that.

GTL: Did a professional athlete ever inspire you as a child?

JG: I never really looked up to any sportsman other than Jonny Wilkinson. I liked his mindset and I would watch video after video of him kicking and I’d then try and simulate that myself. I wouldn’t take any days off and I’d constantly strive to be great and work on my craft all of the time.

GTL: How has Covid-19 affected your post and pre-season?

JG: Everything has been put on hold and it’s changed my mindset and everything I do. Everything is so strict that it just makes trying to better yourself even harder but you’ve just got to embrace that. But this isn't too dissimilar to doing four years at Pine Bluff where I went to college. That was quite a struggle in itself. I think that kind of prepared me for this. I just look at the positives you know - I'm well, I’ve got cleats on my feet and footballs to kick. There are precautions in place to keep us safe and as long as we do the right thing off the field then everything should work out when we get through this virus together. We don't have it hard at all. Everything is strange but we're getting paid and we’re playing football. I think people are aware of what some of the boys in the NFL get paid so I wouldn’t be complaining. I don’t feel sorry for myself at all. I do feel bad for those people who are jobless now and trying to get some sort of money from the government. They’ve maybe got kids in their life and they’re finding it hard to make ends meet. That’s tough. That’s called struggling. Struggling isn’t being worried about whether your breakfast has been made for you or whether you’ve had your cleats cleaned - those are first world problems. Things are different but we have a game in 12 days and we’re preparing to go up to Baltimore to beat them. We’re all wearing devices that ensure we stay six feet away from the nearest person and we just need to keep doing the right things.

GTL: What can Cleveland achieve this season and what’s the mood in the camp like right now?

JG: The mood is great. Everybody is just - as we say here - embracing the suck and doing everything that we can to get around this virus thing. We’ve got a new coaching staff and they’re all awesome people. Coach Stefanksi is a great guy and everybody is super focused and just looking to take care of business in 12 days. We’re doing it smart, we’re doing it well and we’re going to get it done.

For all the latest news on Jamie and the Cleveland Browns visit www.clevelandbrowns.com