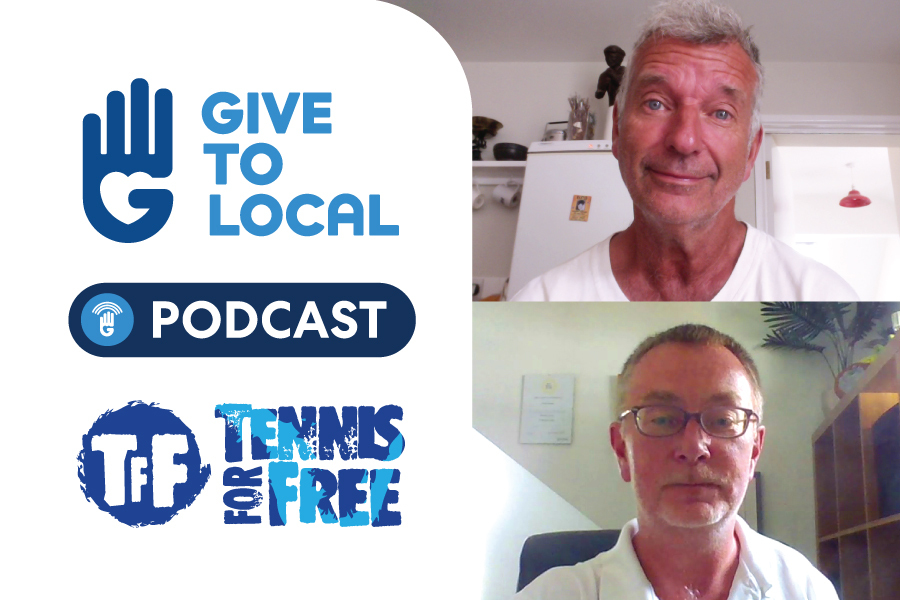 What does a fridge, a plane and a few too many drinks have to do with revitalising grassroots tennis? In the case of Tennis For Free, quite a lot!

Founders Tony Hawks and Patrick Hollwey’s first meeting was a chance one on a flight back from India. Patrick recognised Tony as the author of ‘Round Ireland With A Fridge’ and invited him for a drink to pass the time.

The pair soon discovered their joint passion for tennis and a few drinks later decided it was time to make tennis accessible for everyone across the UK. After their headaches subsided, Tennis For Free was officially born in 2004.

Tony and Patrick joined Justin Lockwood on the second episode of the GiveToLocal podcast to chat about their love for tennis and why making the game accessible is vitally important to its survival.

“Most of the interesting things I’ve done in my life, rather tragically, have been born out of having a few too many beers,” said Tony.

“I happened to be on a flight back from India where I’d been on holiday and I met this really nice Irish guy called Patrick and he said come and have a drink up in the bar.

“I expected to be there half an hour but we spent the entire journey in this bar talking about the state of tennis in the UK.

“I told Patrick about these three park courts I used to live near in south Wimbledon. The courts were in terrible condition with a sign up saying ‘a ticket must be purchased before play’ and nobody was ever on them – they were pointless!

“He agreed with me totally and through slurred words we said we’d put the world to rights and make tennis courts in parks free. We’ve made great progress but there’s still a lot that needs to be done.”

Tennis For Free’s mission is to launch as many free ‘walk on and play’ sites around the country as possible and they’re working with GiveToLocal to help do just that.

“GiveToLocal is huge for us,” said Patrick.

“The ethos behind GiveToLocal is exactly the same as that behind Tennis For Free. It’s about bringing communities together to support each other.

“Whether it’s individuals, local businesses, sports facilities or clubs, it’s about integrating the whole thing at a local and national level.

“We need support for grassroots sports now more than ever. It’s about getting behind communities and empowering them to reclaim their community spirit through sport.”

The full podcast episode will be out later this week, watch or listen on our brand new podcast page - there's also a £250 Kitlocker voucher up for grabs!