Webinars A Hit With Community Clubs 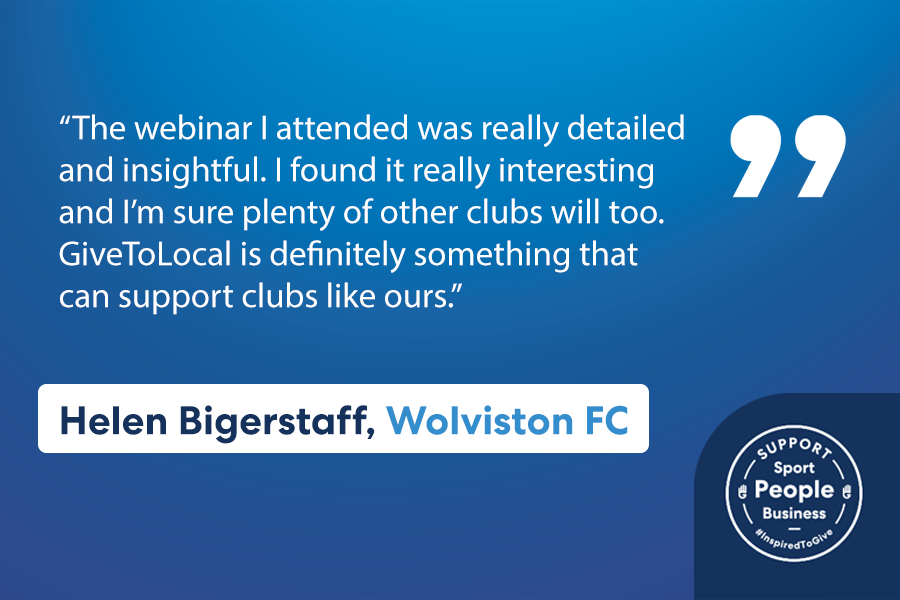 GiveToLocal’s new interactive webinars are proving to be a huge hit with community sports clubs across the UK.

Launched earlier this month, the webinars explain to clubs how they can secure £2,000 per year for their teams through our innovative service.

With lockdown restrictions loosening and community sport clubs beginning to move closer to a return, now is the perfect time for clubs to build up new streams of revenue, enabling them to plan for their future.

And Wolviston FC’s Helen Bigerstaff, who attended one of GiveToLocal’s new webinars, admits that she found it incredibly beneficial.

“I thought the webinars were really good,” she said.

“The webinar that I attended gave me an insight into everything that GiveToLocal does. It explained everything about the ins and outs of the organisation.

“Sometimes, when you sign up for webinars, you think that you’ll be sat there bored out of your mind trying to stay awake!

“Thankfully though, that wasn’t the case with the webinar I attended! It didn’t feel anything like that. It was informative and really well put together.

“I found it really interesting.”

And Helen’s positive words were echoed by Kirkcaldy Rugby’s Stuart Oliver, who was also left impressed by the webinars.

“Personally, I found the webinar really informative,” he said.

“I thought it was really good.

“The webinar covered most of our questions that we had as a club and it really showcased what GiveToLocal offers.

“Some of the video packages that were included were really clean and tidy. They were nice to see.

“Overall, I found the webinar useful and it was nice to be able to find out more about GiveToLocal.”

One of the GiveToLocal team who has been thrilled by the initial webinar feedback is Club Engagement Manager Keith Watson.

A grassroots football coach himself, Keith has seen the struggles and challenges community sport clubs face on a daily basis.

And after hosting a number of the introductory webinars, he believes that they can provide a perfect insight into how GiveToLocal aims to support clubs and communities across the UK.

“Having coached grassroots football for over 20 years, I know the amount of time and effort that goes into running a team.

“What we’re trying to do here at GiveToLocal, is to try and take the burden of trying to scrape together finances away from clubs.

“That’s why we’ve launched our ‘Introduction to GiveToLocal’ webinars.

“Through these webinars, clubs can learn how they can generate and sustain a significant level of funding for all of their teams through GiveToLocal.”

GiveToLocal’s interactive webinars run regularly on Monday to Thursday (7-8pm). To sign up for a webinar, click here.