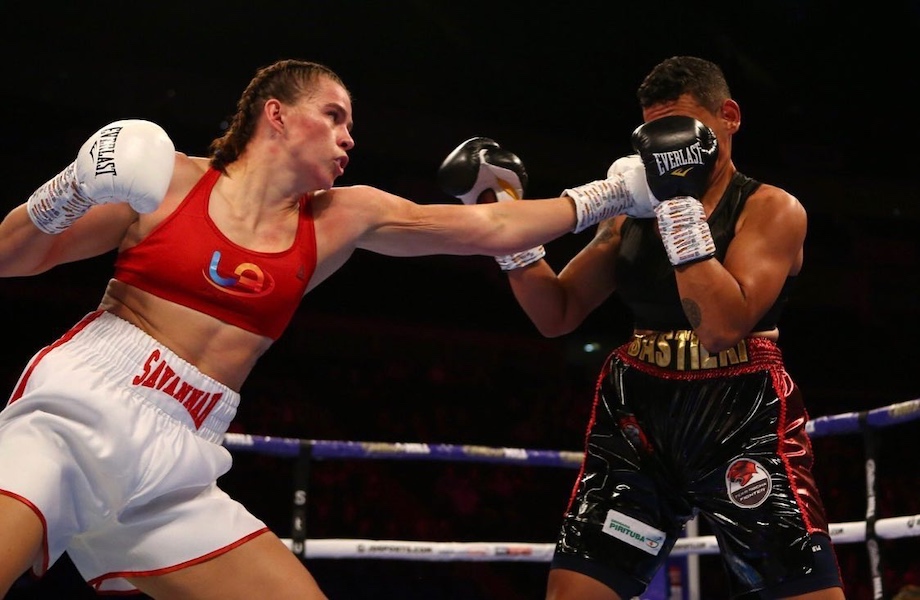 Savannah Marshall was due to fight for a world title in front of a capacity crowd at Newcastle’s Utilita Arena last weekend but coronavirus forced a second postponement of her biggest bout to date.

GiveToLocal caught up with one of the UK’s rising stars as we begin to work with boxing clubs across the UK.

GiveToLocal: When do you think you’ll be able to get back into the ring?

Savannah Marshall: I was due to fight New Zealand’s Geovana Peres for the WBO female light-heavyweight title in April. It got pushed back to June 27 and now there’s a new date in October. Who knows if and when it will happen? It’s really just a waiting game. There’s talk of second waves of the coronavirus all over the world and travel restrictions seem to change week by week. If I can get in the ring before the end of the year then I’ll be happy.

GTL: How tough has it been in lockdown?

SM: At the start I was devastated that the original fight had to be moved back. I had the June date in my mind and trained really hard for six or seven weeks before I realised the fight would be off again. At that point I decided to give my body a rest. But I love training and I love preparing for a fight so not having a target in my sights is tough. I’ve applied for loads of jobs but I didn’t even get as far as an interview with Lidl! That was a bit demoralising. Now I’m just focusing on the boxing and ticking over until I get the green light to get back in the ring.

GTL: Is the financial side a worry?

SM: I’d already spent £5-10k on my training camp for the world title fight. I was only two weeks out from competing so I’d already spent thousands on sparring partners, the best food and the best physios. Of course, I was hoping to get all of that money back when my fight paid. But the fight never happened. So that’s thousands of pounds that I am never going to get back. It is what it is. I’ve experienced plenty of setbacks in my career and this is just another one - albeit something very different.

GTL: Boxing is a sport that’s suffering at every level but how concerned are you about the lifeblood of the sport - the grassroots gyms?

SM: It’s very tough for them. I’m still in regular contact with my former coach Tim Coulter at the Headland Amateur Boxing Club in Hartlepool and they’re doing what they can. They are getting regular guidance on how they can move forward but the fact is that the gyms aren’t open to the hundreds of members who would usually be in there every week. You can implement social distancing but there are so many kids who want to get involved that’s it’s an impossible job. The boxers are allowed to meet outside and the club is organising shadow boxing and sprints but it’s not the same.

GTL: How frustrating must it be for the young boxers who have been forced to put their sport on hold?

SM: When I was a teenager I lived and breathed boxing. I’d count the hours until school was over and I’d head straight to the gym. I can’t imagine what it’s like not having that opportunity. On social media I’ve seen pictures of parents converting their back gardens and installing punch bags and I’ve seen kids shadow boxing with their siblings. That’s fantastic for those children able to access that kind of support. But I wouldn’t have been one of those kids. I was completely reliant on the facilities at Headland and there will be kids now in the same position. I’m getting frustrated and so it must be frustrating for everyone involved with boxing at grassroots level.

GTL: What do you remember about the start of your grassroots boxing journey?

SM: I first pulled on a pair of gloves when I was 11. I’d always been sporty. I grew up on quite a rough estate in Hartlepool but I played football and netball at school. I remember a boy from my school used to box and he was always showing me his trophies. I thought to myself that I wanted to win a trophy of my own. I went along to Hartlepool Headland Amateur Boxing Club and it started from there. When I first went there I took a couple of friends with me - I think four of us started but the rest of them only went for a couple of weeks.

GTL: Why did you keep going back when your friends drifted away?

SM: I just fell in love with being part of that close-knit team within the club. Although boxing is a very individual sport you feel part of a special community within the gym. It was also a competitive environment which I loved - if someone challenged me to a circuit faster than them then I’d take that on. Could I do as many press-ups as the next person? I’d give it a go. I just loved that competitive element in the gym - probably more than the fights! Tim looked after me and became like a second dad but I was never given an easy ride and never given any special treatment. Those years in grassroots boxing were the making of me.

GTL: When did you realise that you had a special talent?

SM: When I got to 17 or 18 I realised that London 2012 was a realistic target. I was put on the pathway to the Olympics. I’d just turned 18 and I got sent to the senior world championships. I’d only been a senior for a short time and in 2010 I came home from Barbados with a silver medal. At that point I was catapulted into the GB set-up with a world ranking of two. I suppose that was the first time that I actually thought ‘I’m alright at this’. I was getting paid to do what I love. London was looming but everything was still going to plan. I went to China and won gold in the 2012 World Championships on my 21st birthday. I headed to the Olympics ranked as the best middleweight in the world and as the first ever British women’s world champion.

GTL: Five years later you’d been signed by Floyd Mayweather and you made your professional debut on the undercard of The Money Fight…that must have been a pivotal moment?

SM: It was at a time when the women’s professional game was exploding - a lot of women had turned professional but they needed more to make the fights. It struck me as a huge opportunity. There was the chance to go to America and work out of the Mayweather Gym in Las Vegas. I made my professional debut on the Mayweather/Conor McGregor card in front of 14,000 people. I was part of Floyd Mayweather Promotions - aka The Money Team - but it was another steep learning curve. I learnt all about the way the professional game works and it was an eye-opener. America was a real ‘life’ experience. In those six months I grew so much - emotionally more than physically. Looking back that was a massive step forward for me. Grassroots boxing in Hartlepool shaped me as an athlete. But America made me as a person.