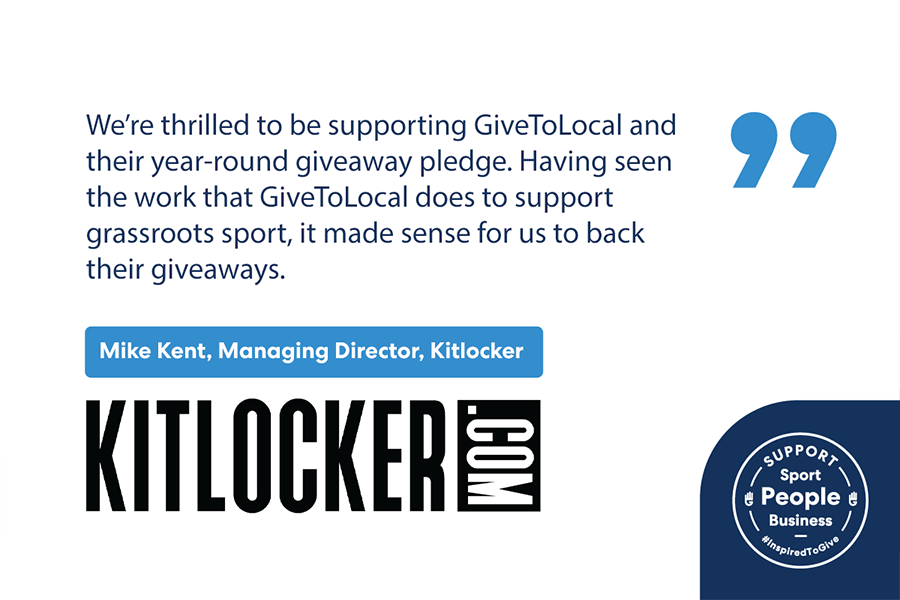 GiveToLocal is delighted to announce a year-round commitment to running our ever-popular giveaways.

Fronted by Sony Award-winning presenter Justin Lockwood, we have decided to make our popular promotional videos a regular feature over the next 12 months.

Working alongside national partners Kitlocker, the giveaways have become a regular fixture across GiveToLocal’s bustling social media channels, providing clubs with the opportunity to secure vital support during a period of prolonged uncertainty.

And after running multiple rounds of our ‘21 Days of Giveaways’ during the last four months, GiveToLocal Founder and CEO Neil Gardiner is delighted at the prospect of being able to support more community sports clubs.

“We’ve already run two sets of giveaways since April and we’re currently in the middle of our third,” said Neil.

“The giveaways have been really successful. It’s been incredible to see the engagement from the clubs that make up the GiveToLocal community and it’s great to be able to use these giveaways as a way to initiate that engagement.

“We’ve made this decision because we want to make this a long-term commitment. Alongside our webinars, which we’ll be running all year-round, we’re now keen to make these giveaway rounds a regular fixture.

“These are really exciting times for GiveToLocal and we can’t wait to help more teams receive more support.”

“We’re thrilled to be supporting GiveToLocal and their year-round giveaway pledge as part of our national partnership,” said Mike.

“At Kitlocker, we’ve always focussed upon supporting grassroot sport. That’s something that’s always been at the heart of everything we’ve done.

“Having seen the work that GiveToLocal does to support grassroots sport, it made sense for us to back their giveaways.

“To be able to support so many clubs across the UK through our partnership with GiveToLocal is incredibly rewarding, so we’re delighted that we’re able to help out.”

Since April, Justin Lockwood has the been the face of GiveToLocal’s daily giveaways.

And after appearing across the organisation’s social media channels for the last four months, Justin admits that the opportunity to host more giveaways was an offer he simply couldn’t refuse.

“When you’re telling a family that they’re going to be flying out to Disney World, it’s pretty hard not to get excited!

“It’s been an incredible thing to be a part of and I’m really excited to be fronting more giveaways.

“To anyone who’s involved in grassroots sport, keep your eyes on GiveToLocal because there are plenty of exciting plans in the works!”